Let The Right One In Review 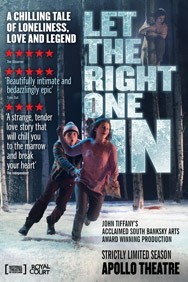 Blood, romance and gore makes Let The Right One In an incredibly moving experience at the Apollo Theatre.

The Royal National Theatre is nearly always the topic of conversation when it comes to ground-breaking productions and theatrical excellence, but now they have a rival hot on their heels in the form of the National Theatre of Scotland.

Launched eight years ago, the NTS has seen huge success with their production of Black Watch that has since been seen at the Barbican in London and gone on to tour the United States. Interestingly, their new project The James Plays will see them collaborate for the first time with the National Theatre. Keep your friends close, but your enemies closer…

Let the Right One In marks the National Theatre of Scotland’s first foray into the West End and what a mark it has made! The production started life in Dundee last summer, receiving unanimous critical acclaim.

The vampish tale then came to London’s famous Royal Court Theatre in Christmas last year. Now the production has taken up residence at the Apollo Theatre on Shaftsbury Avenue in March, notably less than four months since the theatre suffered a catastrophic mid-performance partial ceiling collapse on December 19 that left dozens of theatregoers injured, some seriously, as they watched The Curious Incident of the Dog in the Night-time (now set to re-open at the Gielgud Theatre in June).

Now stunningly restored to its former glory, complete with glinting gold finish around the circles and boxes, the theatre’s revamp is, however, not yet fully complete, with the balcony and ceiling currently sealed off, with a temporary 'immersive cyclorama’ to cover the building works above.

Based on a 2004 Swedish novel by John Ajvide Lindqvist and a subsequent 2008 film that was then re-made in English in 2010 under the title Let Me In, the stage adaptation of Let The Right One In follows the story of a bullied teenager loner named Oskar (Martin Quinn) who falls in love with a girl called Eli (Rebecca Benson), only to discover that Eli is not what she first seems.

Oskar lives in a small community on the edge of a forest where even the living look like they are halfway to the grave. There is a serial killer on the loose, but the police are stumped. All this passes by the lonely Oskar who is hounded by his tormenting bully, Jonny (Graeme Dalling), and ignored by his school gym teacher (Gavin Kean).

As if this wasn’t enough to cope with, the awkward adolescent must deal with his alcoholic single mother (Susan Vidler) and his hard-hearted father (Gary Mackay). The young girl Eli, who has just moved in next door, initiates a friendship with Oskar and tries to solve his problems, but at a cost.

Directed by John Tiffany and adapted for the stage by Jack Thorne, the pair have chosen to ignore much of the social commentary of the original film and replace it with the much bigger idea of what it means to be human. Tiffany and designer Christine Jones have created a strange, creepy world caught in the ice-like grip of a never-ending winter. The florescent glow of a street lamp illuminates this eerie landscape of snow and silver birch trees.

This white landscape is the perfect backdrop for when the blood starts to flow and, boy, does it come thick and fast. The very opening scene sees a body hung upside down from a tree as the blood drains from the lifeless corpse.

Let The Right One In is essentially a coming-of-age love story with a twist. Rebecca Benson’s Eli is at one moment a fragile and lonely young girl, but then at the next, a savage beast with hundreds of years under her belt. Martin Quinn’s Oskar is painfully isolated and gives the character a quiet tenderness that melts the hearts of the audience in the first few moment of the play.

This love story only works because of the palpable chemistry between the lead couple and the fact that Thorne’s script allows them time to develop their relationship.

Ólafur Arnalds’s score is textured with atmospheric chords that heighten the feeling of dread running through the production. Frantic Assembly’s Steven Hoggett has once again collaborated closely with Tiffany on the movement. However, this time, his trademark high-octane energy and been replaced by a more tender and sometimes balletic dynamism. It is obvious that Arnalds and Hoggett have worked closely to match the movement with the music to create slickly fluid transitions in and out of these heightened moments.

Let The Right One In is every bit as moving as the original film, and more – the moments of jump-out-your-seat terror have been raised to a blood-chilling level that leaves the audience cowering behind their programs. Catch this one while you still can.

Let The Right One In tickets