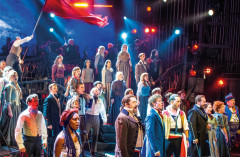 Cameron Mackintosh today (14 October 2020) announces a two-week extension to the run of Les Misérables -The Staged Concert due to extraordinary public demand. Playing at the Sondheim Theatre over the Christmas period, the run which begins on 5 December 2020 is now extended to 31 January 2021.

Cameron Mackintosh said: “The phenomenal speed at which the Christmas season of Les Misérables -The Staged Concert has sold out in just twenty-four hours has astonished us all. To try to accommodate the tens of thousands of people still trying to get tickets we are adding sixteen extra performances today at noon. It is wonderful that the public are so enthusiastic to come back to see a great show safely in the West End.”

The return of the Concert was announced on the Final of Britain’s Got Talent on Saturday night following a spectacular musical extravaganza from the casts of Les Misérables – The Staged Concert, The Phantom of the Opera and Mary Poppins. With a reduced seating capacity of 750, Covid safety measures and social distancing will be in place front of house, on stage, backstage and throughout the building.

The cast for this run includes Michael Ball as Javert, Alfie Boe as Jean Valjean, Carrie Hope Fletcher as Fantine and Matt Lucas as Thénardier. At certain performances John Owen-Jones will again play the role of Jean Valjean.

The critically acclaimed new production of Les Misérables which opened in January of this year will hopefully re-open at the Sondheim Theatre sometime in the Spring as soon as the Government has withdrawn social distancing and reached Stage 5 allowing full capacity audiences.

Les Misérables -The Staged Concert is being staged without any financial help from the Culture Recovery Fund or the National Lottery.