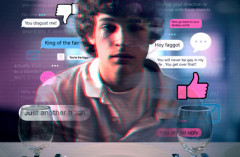 As part of the Finborough Theatre’s celebrations of Canada’s 150th birthday, Canadian playwright Jordan Tannahill, “the hottest name in Canadian theatre”, will debut his play, Late Company, at the Finborough Theatre, for a strictly limited season from 25 April – 20 May 2017, with press nights on 27 April/28 April.

This production will be directed by Michael Yale, with set and costumes by Zahra Mansouri, lighting by Nic Farman and sound by Chris Prosho.

One year after a terrible tragedy; 2 sets of parents, one dead son, one living son. Who is to blame?

A suburban dinner party for closure after 17 year-old Joel commits suicide. The guests; his heartbroken mother and father, his so-called tormentor Curtis, and his parents.

Far from finding the peace they seek, the dinner strips bare their good intentions to reveal layers of parental, sexual, and political hypocrisy.

Written with sensitivity and humour, Late Company explores restorative justice, cyber bullying, and the ever-changing complexities of parenthood in the 21st century.

Jordan Tannahill (writer) is a Canadian playwright and filmmaker and has been described as “the future of Canadian theatre” by NOW Magazine. His work has been presented in theatres, festivals, and galleries across Canada and internationally.

Jordan’s plays have been honoured with various prizes including the 2014 Governor Generals Award for Drama for his book Age of Minority: Three Solo Plays, the 2014 John Hirsch Prize for directing, and Dora Awards for ‘Outstanding New Play’ for rihannaboi95 in 2013 and Concord Floral in 2015. Concord Floral also received the 2015 Carol Bolt Award and was shortlisted for the 2016 Governor General’s Award for Drama. In 2016 Botticelli in the Fire & Sunday in Sodom won the Toronto Theatre Critics Award for ‘Best New Play’ and it’s production at Canadian Stage received the Dora Award for ‘Outstanding Production’.

Jordan is currently working on new projects with the National Theatre (UK), the National Film Board of Canada, and the Stratford Festival.

From 2012 – 2016, in collaboration with William Ellis, Jordan ran the alternative art space Videofag out of their home in Toronto’s Kensington Market neighbourhood. Over the four years of its operation, Videofag became an influential hub for queer and avant-garde work in Canada. Jordan’s production of Sheila Heti’s All Our Happy Days Are Stupid, produced and directed with Erin Brubacher, premiered at Videofag in 2013 and went on to sold-out productions at Toronto’s Harbourfront Centre’s World Stage and New York City’s The Kitchen in 2015.

From 2008 – 2016, Jordan wrote and directed plays through Suburban Beast a Toronto-based theatre company he founded with Rae Powell and later ran with Erin Brubacher. The company’s work was staged in theatres, art galleries, a car garage, Honest Ed’s discount emporium, a frat house, and YouTube, and frequently involved performances by non-traditional performers.

His book Theatre of the Unimpressed: In Search of Vital Drama published by Coach House Press in 2015, was called “essential reading for anyone interested in the state of contemporary theatre and performance” by The Globe and Mail. It is currently on the curriculum of several North American universities.

As a filmmaker, Jordan’s work has been presented in festivals and galleries the world over including the Toronto Int. Film Festival, the Art Gallery of Ontario, and the Tribeca Film Festival. He is currently working with filmmaker Stephen Dunn on adapting his play Botticelli in the Fire for the screen.

Jordan has also worked in dance, choreographing and performing with Christopher House in Marienbad for the Toronto Dance Theatre in 2016 and choreographing House in the 2014 solo Rough House, also for the Toronto Dance Theatre. In 2015 he wrote the text for The Dietrich Group’s This Is a Costume Drama, which premiered at Harbourfront Centre’s World Stage.