by Best of Theatre Staff on Friday 13 July 2018, 9:59 am in Cast Changes and Announcements 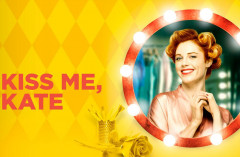 From the Golden Age, a riotous, romantic musical comedy to make your heart soar. It’s opening night for feuding divorcees Fred and Lilli as they star in The Taming of the Shrew. But as the curtain rises, gambling, gangsters and mistaken identity conspire to create chaos.

Paul Foster directs this lavish and sensational celebration of theatre featuring some of Cole Porter’s finest songs: So In Love, Brush Up Your Shakespeare and Too Darn Hot.

Edward Baker-Duly plays Fred. His US theatre credits include the Broadway production of The King And I; and the Off-Broadway production of Peter And The Starcatcher. His West End theatre work includes The King and I, The Wizard Of Oz, Gone With The Wind, South Pacific, West Side Story, Salad Days. UK: Rookery Nook, Noises Off, Anyone Can Whistle, The Lady Vanishes, Copacabana, The Pirates of Penzance, Singing in the Rain, The Full Monty, Twelfth Night and The Mikado. For television, his work includes Shades Of Blue, Billions, Elementary, The Blacklist, Royal Pains, Downton Abbey, Upstairs Downstairs, Micro Men, New Tricks and Yes Prime Minister; and for film, Heidi Queen Of The Mountain, DeLovely, Botched, The Circle and Welkome Home.

Paul Foster returns to Sheffield Theatres where he previously directed Annie Get Your Gun. His other theatre credits include The Light Princess and Sweet Charity (Cadogan Hall), A Little Night Music and Laurel and Hardy (The Watermill Theatre), Tell Me on a Sunday (The Watermill Theatre and UK tour) Bette Midler and Me (St James Theatre), Flora the Red Menace (Edinburgh Festival), Bells are Ringing, Darling of the Day, Crimes of the Heart (Union Theatre), A State Affair (MTA), Cowardy Custard (Yvonne Arnaud and UK tour), The Vagina Monologues (UK tour) and Little One (Royal Court Young Writers Festival). His radio credits include Britannicus.