Kerry Ellis to Star in THE IMPORTANCE OF BEING EARNEST

by Best of Theatre Staff on Friday 1 December 2017, 10:17 am in Cast Changes and Announcements 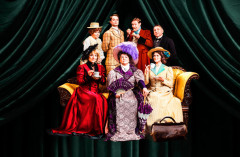 They join the previously announced Gwen Taylor as Lady Bracknell and Susan Penhaligon as Miss Prism. The tour will begin on24 January at the Yvonne Arnaud Theatre in Guildford, ending on 28 April in Eastbourne.

Renowned theatre star and recording artist, Kerry Ellis is best known for originating the role of Meat, in Queen’s We Will Rock You and was the first British actress to play Elphaba in Wicked, for which Kerry won the 2008 What’s on Stage Award for ‘Best Takeover in a Role’. She then played the role at the Gershwin Theatre on Broadway for six months, where she won the Broadway.com Audience Award for ‘Favourite Female Breakthrough Performance’. Her other West End theatre work includes Sara in Murder Ballad at The Arts Theatre, Nancy in Oliver!, Eliza Doolittle in My Fair Lady, Ellen in Miss Saigon, Fantine in Les Misérables and she took over from Nicole Scherzinger in the role of Grizabella in Cats. Kerry has achieved chart-topping success as a recording artist, releasing four albums and touring the UK and Europe with Brian May of Queen.

Thomas Howes is best known for playing William Mason in ITV’s Downton Abbey. He has since appeared as Yashvin in the 2012 film adaptation of Anna Karenina and played Winston Churchill in Murdoch Mysteries (ITV). His theatre credits include Ratty in The Wind in the Willows: The Musical (UK Tour), The Mousetrap (Original UK Tour), The Winslow Boy  (Theatre Royal Bath) and The History Boys (National Theatre/ West End).

Peter Sandys-Clarke’s theatre credits include Ronald Storrs in Ross (Chichester Festival Theatre), Peter Gilbert in The Browning Version (Theatre Royal Bath and tour), Gerald in When We Are Married (Garrick Theatre), Jerry in A Daughter’s a Daughter (Trafalgar Studios), Withers in The Letter (Wyndham’s Theatre and tour) and Raleigh in Journey’s End (Playhouse Theatre and Duke of York’s Theatre). His TV work includes The Royals (E!), The Crown (Netflix) and Indian Summers (Channel 4).

Oscar Wilde’s greatly admired and much loved comedy THE IMPORTANCE OF BEING EARNEST follows Jack Worthing’s endeavours to marry Algernon’s cousin, the beautiful Gwendolen. But first he must convince the fearsome Lady Bracknell of his respectability. Wilde’s classic play looks at the clash of town and country in a story of romance, identity, perambulators and capacious handbags.