Justin Fletcher extends his run in The Railway Children

by Best of Theatre Staff on Tuesday 13 September 2016, 10:31 am in Cast Changes and Announcements 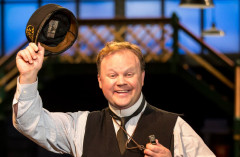 BAFTA award–winning presenter, actor and voice-over artist, Justin Fletcher, who joined the cast of the Olivier Award-winning production of Mike Kenny’s stage adaptation of E. Nesbit’s novel The Railway Children – Live on Stage on 31 August, has now confirmed he will be playing an extra two weeks, now finishing on 19 November (*please note, Justin will not be playing Perks during w/c 31 October). Justin, who is known as the much-loved children’s character Mr Tumble, has agreed to extend his run due to huge popular demand. The Railway Children – Live on Stage must end on 8 January 2017, following more than two glorious years at King’s Cross Theatre, where it opened to critical and public acclaim on 14 January 2015, following previews from 16 December 2014.

Justin Fletcher has presented on various children’s channels and programmes, including Fun Song Factory on GMTV, Tikkabilla (BBC), CBeebies, and Justin’s House (BBC). As Mr Tumble, he presents the BAFTA and Royal Television Society award-winning Something Special (BBC), a children's television programme designed to introduce children to Makaton signing, and specifically aimed at children with delayed learning and communication difficulties. Justin has voiced the characters of Shaun and Timmy for Shaun the Sheep. He was appointed Member of the Order of the British Empire (MBE) in the 2008 Birthday Honours for services to "children's broadcasting and the voluntary sector".

Also in the cast of The Railway Children are Suzy Cooper as Mother, Sophie Ablett as Bobbie, Matt Jessup as Peter, Beth Lilly as Phyllis, Lindsay Allen as Mrs Perks, Peter Gardiner as Doctor/Butler, Connie Hyde as Mrs Viney, Shaun McCourt as Jim, Blair Plant as Father/Schepansky, Moray Treadwell as the Old Gentleman and Adam Collier, Helen Brampton, Alan Drake and Julie Gilby. The children’s ensemble is made up of four teams of ten children aged between 8 and 16.