Review of John at the National Theatre 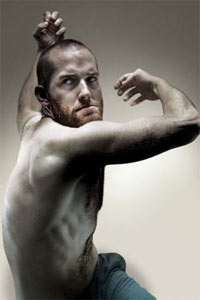 Choreographer/Director Lloyd Newson and his celebrated company DV8 have been pushing at the boundaries of dance theatre for decades now, in and out of fashion, acclaimed and reviled by turn. Always thrilling, always watchable, always unforgettable. Newson long ago graduated from being a maverick figure to being part of the mainstream theatre establishment and his work is now commissioned by major theatres across the world, thankfully giving him an artistic freedom unfettered by commercial considerations.

His last work at the National Theatre, CAN WE TALK ABOUT THIS, demonstrated the artist working at his considerable best. It posed uncomfortable questions for the liberal theatre goer about the validity of criticising the unacceptable violence of Islam when we’re all so desperate to be politically correct. It took a series of testimonies, some funny, some harrowing all unbelievably poignant and the dancers responded physically as if the spoken word were music, the abstract movement reflecting the inner turmoil, the violence of which contrasted or affirmed what was being said. The performers were breathtakingly athletic and expressive and the themes, ideas and dilemmas have haunted me ever since.

This new piece, whilst still eminently watchable and startling explores a world that’s much more mundane.

This time the majority of the text is taken from an interview with the John of the title. The first half of the swift interval-less piece uses abstract and not so abstract dance to illustrate the horrific life story of a man whose early life is such an unrelenting catalogue of domestic violence, substance abuse, incest, murder and heartbreak that it almost tips into the absurd.

Then John finds a sanctuary, gay male saunas, and the piece settles down to explore the dimly lit world of anonymous sex amongst the steam.

It’s an unashamedly broken backed evening, the two half’s barely gel, despite John being central to both. His voice is almost drowned out by a series of other guys reflecting on sauna life and if even indulges in a little preachiness about sexual health. I loved the uncompromising, unashamed audacity of this.

Female characters barely get a look in; in fact they’re often represented by dresses on coat hangers. This is a man’s world and predominantly a homo-erotic one. Very, very familiar territory from past DV8 work except time has moved on and the seedier side of gay life has been so regularly presented on stage since Newson pioneered exploring it that I did wonder what surprises or interest this holds for a straight audience; As my female assistant had quipped earlier in the day, male sexuality is hardly under-explored in British Theatre.

I’m no stranger to the gay underground world John explores, I even recognised some of the anecdotes featured and could probably identify the sources but even I couldn’t quite see the point of another exploration of what gay men get up to in private. Who cares?

I’d have much preferred to hear about some of the characters in John’s life who seldom get a voice on the glamorous stages of our National Theatre.

What about his mum? A woman who endured the most incredible cruelty and violence, journeying repeatedly to hell and back in her attempts to build a family life. As things stand, when we’re allowed to see her at all she’s usually in a huddled heap on the floor, the victim of yet another violent atrocity, how extraordinary would it have been if the piece had taken us inside her head rather than focussing on the oft explored dilemma of whether or not to wear a condom and why men are drawn to satisfying each other.

My disappointment at the conventional subject matter aside this is still a virtuoso display of extraordinary choreography and dance with a stunning central performance from Andi Xhuma in the title roll. The expressiveness of every jerk and roll of his body has to be seen to be believed.

Not vintage Lloyd Newson or DV8 then but there’s quite enough to engage us until his next return to form. In a programme note he explains how telling John’s story distracted him from making a piece about assisted suicide. I hope he goes back to it. Now, that would be a subject worthy of his exceptional gifts.