by Best of Theatre Staff on Monday 10 December 2018, 11:03 am in Cast Changes and Announcements 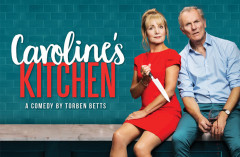 Jasmyn Banks and Tom England will join the previously announced Caroline Langrishe, Aden Gillett, James Sutton and Elizabeth Boag in the 2019 national tour of Torben Betts’s biting comedy, CAROLINE’S KITCHEN, beginning on 24 January 2019 at Derby Theatre, running through to 13 April 2019 at the Mercury Theatre, Colchester. This will be followed by an off-Broadway season in New York Spring 2019. There will be a national press night at Cambridge Arts Theatre on Tuesday 29 January 2019.

Caroline Mortimer, the nation’s favourite TV cook, has it all: a sparkling career, a big house in fashionable North London, a (golf) loving husband, smart kids and the best kitchen money can buy. But beneath the immaculate furnishings and studio lighting and away from the glare of the ever-present cameras, Caroline must face the looming collision of living a private life in the public eye. What happens when the cameras turn off and the truth comes out?

Betts’s dark domestic comedy examines how people in the public eye battle with the responsibility and demands of real life and, in true Betts style, it explores the dynamics of age, class, politics and marriage.

Caroline Langrishe is best known for her television roles as Charlotte Cavendish in Lovejoy, Georgina Channing in Judge John Deed, Marilyn Fox in Casualty and Judith Leicester in Doctors. Caroline’s recent theatre credits include the UK tour of How the Other Half Loves, the Mercury Theatre Colchester production of Feydeau’s Bang Bang adapted by John Cleese, and Countess Lovel/Rose Trollope in Lady Anna: All at Sea at Park Theatre, London. Aden Gillett can be seen playing Scrooge in Rachel Kavanaugh’s new production of A Christmas Carol adapted by David Edgar for the Royal Shakespeare Company this Christmas. His other recent theatre credits include Arthur Winslow in Rachel Kavanaugh’s production of The Winslow Boy (UK Tour), Theseus/Oberon in Dominic Dromgoole’s production of A Midsummer Night’s Dream (Shakespeare’s Globe) and Sir Colenso Ridgeon in Nadia Fall’s production of The Doctor’s Dilemma (National Theatre). He is probably best known for his television roles as Jack Maddox in The House of Eliott and Edward Campbell in Holby City. He will be appearing in series three of The Crown. James Sutton is best known for playing John Paul McQueen in Hollyoaks from 2006 to 2017, and Ryan Lamb in Emmerdale from 2009 to 2011.

Torben Betts was born in Lincolnshire and studied at Liverpool University. He became the resident dramatist at Scarborough’s Stephen Joseph Theatre in 1999. Poet and dramatist Liz Lochhead said Betts "is just about the most original and extraordinary writer of drama we have." His play The Unconquered won Best New Play 2006/07 at the Critics’ Awards for Theatre in Scotland. 2015 saw a revival of his acclaimed 2012 play Muswell Hill at London's Park Theatre, What Falls Apart opened at Newcastle's Live Theatre, and his version of Chekhov's The Seagull was staged at Regent's Park Open Air Theatre. In February 2016, Betts adapted Get Carter for Northern Stage in Newcastle, running in tandem with The Original Theatre Company’s UK tour of his critically acclaimed Invincible, which had a month-long run at the 13th annual Brits Off Broadway festival in New York City.

CAROLINE’S KITCHEN is directed by Alastair Whatley, with design by James Perkins and lighting by Chris Withers. The national tour is produced by Tom Hackney for The Original Theatre Company, Ghost Light Theatre Productions and Eilene Davidson.