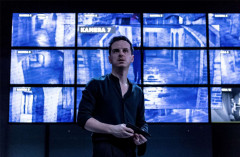 Olivier Award-winning director, Robert Icke’s (Mary Stuart, The Red Barn, Uncle Vanya, Oresteia, Mr Burns and 1984), ground-breaking and electrifying production of William Shakespeare’s Hamlet, starring BAFTA award-winner Andrew Scott (Moriarty in BBC’s Sherlock, Denial, Spectre, Design For Living and Cock) in the title role, will transfer to the Harold Pinter Theatre, following a critically acclaimed and sell out run at the Almeida Theatre. Hamlet will run for a limited season only from 9 June to 2 September 2017 with press night on Thursday 15 June.

Rupert Goold, Artistic Director, Almeida Theatre said "We’re delighted that with this transfer more people will be able to experience our production of Hamlet. Robert, Andrew, and the entire Hamlet company have created an unforgettable Shakespeare which we’re looking forward to sharing even more widely over the summer in partnership with Sonia Friedman Productions and ATG.”

Robert Icke, Director (and Almeida Theatre Associate Director) said “It has been such a thrill to work with Andrew and the extraordinary company of Hamlet on this play so far, and I'm delighted we're going to continue our work on this play in the West End this summer. I'm also extremely proud to be working with the Almeida and our producers, ATG and Sonia Friedman, to be able to present this play in a way that genuinely throws the doors open to a bigger range of audience members. In an increasingly expensive industry, I can't tell you how brilliant it is for them to commit to having 300 tickets priced at under £30 at every single show."

Andrew Scott, playing Hamlet, "I'm so thrilled and honoured to be playing this extraordinary role with these brilliant actors in Rob's stunning production. We have been overwhelmed with the reaction to our interpretation of Hamlet and I'm so happy that we can share it with a larger audience. This is a play full of heart, compassion and humanity. I'm so happy that we are able to offer 300 tickets for under £30 to every performance in the West End run to allow everybody a chance to see the play."

Hamlet has design by Hildegard Bechtler, with lighting by Natasha Chivers, sound by Tom Gibbons, and video design by Tal Yarden. The Associate Director is Daniel Raggett. Casting is by Julia Horan.

His work as a director includes The Fever at The May Fair Hotel, Mr Burns at the Almeida, Boys and Romeo and Juliet for Headlong. He made his National Theatre debut directing The Red Barn, at the Lyttelton Theatre in October 2016 starring Mark Strong and Elizabeth Debicki.