by Oliver Mitford on Tuesday 14 April 2015, 7:36 am in Cast Changes and Announcements 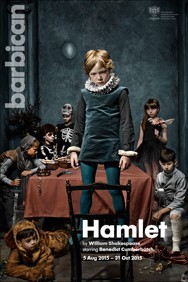 Benedict Cumberbatch’s upcoming performance as Hamlet at the Barbican Theatre looks set to be the theatrical event of the year. As if this wasn’t enough, he will also be joined on stage by some of our greatest acting talent.

Anastasia Hille and Ciaran Hinds will play Gertrude and Claudius respectively, in Lyndsey Turner’s production of the Shakespeare classic due to open on the 5 August 2015 and runs until the 31 October 2015. They are joined by Kobna Holdbrook-Smith as Laertes, Leo Bill as Horatio, Jim Norton as Polonius and Sian Brooke as Ophelia.

Hamlet sold out within hours of going on sale, but 100 seats are due to be released for every performance, priced at just £10 each.

Ciaran Hinds’ London stage credits include Machinal and Closer at the National Theatre, Simpatico at the Royal Court Theatre, and The Night Alive and Assassins at the Donmar Warehouse.

Anastasia Hille is a familiar face on the stages of the National Theatre, having appeared in Dido, Queen of Carthage, Waves, The Effect, Women of Troy, Dream Play, Richard III and The Oresteia.

If you are not one of the lucky few to bag a ticket to the production, fear not, as it will be beamed to cinemas and theatres across the globe on 15 October 2015.