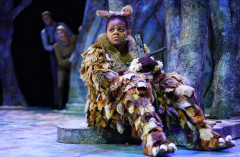 Today Tall Stories have released a first look at The Gruffalo’s Child which will be arriving at Alexandra Palace Theatre for a limited Christmas season this weekend 5 December 2020 – 3 January 2021.

One wild and windy night the Gruffalo’s Child ignores her father’s warning and tiptoes out into the snow. After all, the Big Bad Mouse doesn’t really exist… does he? Join the Gruffalo’s Child on her adventurous mission in this magical musical stage adaptation, of the much-loved picture book by Julia Donaldson and Axel Scheffler.

Tall Stories’ hit musical adaptation of the award-winning sequel to The Gruffalo, published by Macmillan Children’s Books, is ‘everything good children’s theatre should be’ (The List) featuring songs, laughs and lots of fun for children aged 3 and up, and their families.

Christmas doesn’t stop there as the Palace’s East Court will also host Santa’s Grotto. This year we have made some adjustments to the experience and a safe and suitable distance will be maintained between Santa and the children as well as a one-way system. Santa will be in residence on selected dates between 5-23 December, with full information available via the Alexandra Palace website. Skating is a year-round activity at Ally Pally, but the Ice Rink feels particularly celebratory and joyous at Christmas time, giving everyone yet another reason to make this iconic venue a destination for a full-on-festive day out. The Theatre is also the venue for the Ally Pally Christmas Film Season. The programme runs over three weeks, starting on the 5 December. Festive classics on show include, Miracle on 34th Street, Elf, Santa Claus the Movie and Die Hard, among a host of others.