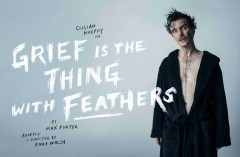 Wayward Productions, led by Judith Dimant, today announce that their inaugural production of Enda Walsh’s adaptation of Max Porter’s award-winning novel Grief is the Thing with Feathers. Walsh also directs, reuniting him with Cillian Murphy, following the huge success of their past collaborations: Disco Pigs, Ballyturk and Misterman.

Grief is the Thing with Feathers is a moving story of a widower and his young sons which becomes a profound meditation on love, loss and living. The production opens on 28 March, with previews from 25 March, and runs until 13 April, ahead of transferring to St Ann’s Warehouse in New York.

Once upon a time there was a crow who wanted nothing more than to care for a pair of motherless children...

In a London flat, two young boys face the unbearable sadness of their mother's sudden death. Their father imagines a future of well-meaning visitors and emptiness. In this moment of despair they are visited by Crow - antagonist, trickster, healer, babysitter. This sentimental bird is drawn to the grieving family and threatens to stay until they no longer need him.

Judith Dimant said today, “It’s a real privilege to have worked with Enda and Cillian on Max Porter’s beautiful book. I had no idea how it would come to life - but it most certainly has. And it’s a dream that it should mark the start of my new company, Wayward Productions.”

Max Porter added, “Working with Enda, Cillian and the whole team on the adaptation of Grief was one of the most revelatory and rewarding experiences of my life. I think they've made a genuinely extraordinary piece of theatre, something radical and unforgettable. For it to be coming 'home' to London, where the book is set, and where the book was written, means a lot to me. The Barbican theatre is the perfect space for Crow. I couldn't be more excited.”

Enda Walsh is a multi-award-winning Irish playwright and director. His work has been translated into over 20 languages and has been performed internationally since 1998.

His other plays include Delirium (Theatre O/Barbican), which played Dublin and a British tour in 2008; Chatroom (National Theatre), which played at the NT and on tour in Britain and Asia (2006-2007); and The Small Things (Paines Plough), which played London and Galway Arts Festival (2005). His early plays include Bedbound (Dublin Theatre Festival) and Disco Pigs (Corcadorca).

In 2014 he received an honorary doctorate from NUI Galway.

In 2006, Murphy made his West End debut at the New Ambassador Theatre in John Kolvenbach’s Love Song, directed by John Crowley. His stage collaborations with Tony Award-winning director Garry Hynes include The Country Boy, Juno and the Paycock, and The Playboy of the Western World at the Gaiety Theatre in Dublin. Murphy also starred as Konstantin in the Edinburgh Fest production of The Seagull directed by Peter Stein, as Adam in Neil LaBute’s The Shape of Things at the Gate Theatre in Dublin and as Claudio in Much Ado About Nothing at Kilkenny Castle.

Murphy first garnered international attention for his performance in Danny Boyle's 28 Days Later. In 2005, he made an indelible impression as Dr. Jonathan Crane/The Scarecrow in Christopher Nolan’s Batman Begins, for which he received a London Film Critics Circle Award nomination. He reprised the role in Nolan’s The Dark Knight and The Dark Knight Rises and later reunited with the director for the critically acclaimed blockbuster Inception. In 2006, Murphy received a Golden Globe nomination for his performance as the transgender outcast Patrick “Kitten” Brady in Neil Jordan’s Breakfast on Pluto. Healso garnered consecutiveBIFA Award nominations for his performances in Ken Loach’s Palme d’Or-winning The Wind That Shakes The Barley, Danny Boyle’s Sunshine and the BIFA-winning Broken, directed by Rufus Norris. Last year, he starred in Sean Ellis’ WWII thriller Anthropoid.

For television, Murphy most recently returned as protagonist Tommy Shelby in Steven Knight’s Peaky Blinders. The season four première on BBC Two scored its best overnight ratings since the series launched in September 2013.

Max Porter is the author of the bestselling Grief is the Thing with Feathers (Faber & Faber, 2015), which won the International Dylan Thomas Prize, the Sunday Times PFD Young Writer of the Year Award, the Europeese Literatuurprijs and the Books Are My Bag Reader’s Award, and was shortlisted for the Guardian First Book Award and The Goldsmiths Prize. It has been sold to 27 territories. His second novel Lanny will be published in March 2019.

Wayward is a new production company led by Judith Dimant, making extraordinary theatre and live performance. The company works with established artists - writers, directors, performers - as well as developing and nurturing the talent of the future, to produce an all-embracing and inclusive programme of work of the highest quality. Grief is the Thing with Feathers is Wayward’s inaugural production.

The company is currently developing further projects including The Cherry Orchard with Toneelgroep, Amsterdam.

Learn how to solve the Rubik's Cube with the easiest method, learning only six algorithms.