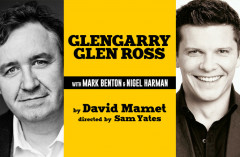 After ‘sealing the deal’ with critics and audiences alike during its smash hit West End run, Sam Yates’ unmissable production of one of David Mamet’s greatest and most lauded plays, Glengarry Glen Ross will embark on a nationwide tour from 14 February 2019 opening at the New Victoria Theatre, Woking. The hard-nosed sales team in this darkly funny classic will then visit Birmingham, Manchester, Milton Keynes,Glasgow, Richmond, Brighton and Cardiff with further tour dates to be announced shortly.

Taking on the memorable roles of salesmen Shelley ‘The Machine’ Levene and the ruthless Ricky Roma are Mark Benton (Waterloo Road, As You Like It, Dirty Rotten Scoundrels, Hobson’s Choice) and Olivier award-winning Nigel Harman (EastEnders, A Chorus of Disapproval, Shrek the Musical) respectively, with further casting to be announced in due course.

Set in an office of cut-throat Chicago salesmen. Pitched in a high-stakes competition against each other, four increasingly desperate employees will do anything, legal or otherwise, to sell the most real estate. As time and luck start to run out, the mantra is simple: close the deal and you've won a Cadillac; blow the lead and you're f****d.

The production of this trailblazing modern classic has designs by Chiara Stephenson, lighting by Richard Howell and is produced by ATG Productions, Act Productions and Glass Half Full Productions.

Nigel Harman’s (Ricky Roma) stage credits include A Chorus of Disapproval, I Can’t Sing at the Palladium, The School for Scandal for Theatre Royal Bath, Shrek The Musical at Theatre Royal Drury Lane, Celebration at the Gate Theatre, Dublin, True West at Sheffield Crucible, Public Property at Trafalgar Studios, Three Days of Rain at the Apollo Theatre, The Common Pursuit at the Menier Chocolate Factory, The Caretaker at the Tricycle Theatre/Sheffield Theatre/UK Tour, Guys and Dolls at the Piccadilly Theatre, Privates on Parade at the Donmar Warehouse, Three Sisters and My One and Only at Chichester Festival Theatre, Lady in the Van at Birmingham Rep, Much Ado About Nothing & Pirates of Penzance, at Regent’s Park Open Air Theatre, Mamma Mia at the Prince Edward Theatre, Damn Yankees at the Adelphi Theatre and Tommy at the Shaftesbury Theatre. Television credits include Cuckoo 4, Mount Pleasant, Downton Abbey, City of Vice, EastEnders, Hotel Babylon, Lark Rise to Candleford, Miss Marple The Mirror Crack’d, Red Cap and The Outsiders. Nigel’s film work includes Patience, Telstar and Blood Diamond.

Sam Yates’ (Director) directing credits include The Phlebotomist at Hampstead Theatre, Desire Under the Elms at the Sheffield Cruicible, Murder Ballad at the Arts Theatre, Cymbeline with Pauline McLynn & Joseph Marcell at the Sam Wanamaker Playhouse, East is East with Jane Horrocks & Ayub Khan Din at Trafalgar Studios followed by two national tours, The El. Train with Ruth Wilson at Hoxton Hall, Billy Liar at the Royal Exchange, Cornelius at the Finborough Theatre and 59E59 New York and Mixed Marriage at the Finborough Theatre.

In 2016 he was voted one of Screen International’s Stars of Tomorrow having previously featured as rising star in theatre in The Observer, and in GQ Magazine’s Men of the Next 25 years for theatre.

David Mamet (Playwright) is the author of the plays November, Boston Marriage, Faustus, Oleanna, Glengarry Glen Ross (1984 Pulitzer Prize and New York Drama Critics Circle Award), American Buffalo, The Old Neighborhood, Life in the Theatre, Speed-the-Plow, Edmond, Lakeboat, The Water Engine, The Woods, Sexual Perversity in Chicago, Reunion and The Cryptogram (1995 Obie Award). His translations and adaptations include Faustus, Red River by Pierre Laville and The Cherry Orchard, Three Sisters and Uncle Vanya by Anton Chekov. His films include The Postman Always Rings Twice, The Verdict, The Untouchables, House of Games (writer/director), Oleanna (writer/director), Homicide (writer/director), The Spanish Prisoner (writer/director), Heist (writer/director), Spartan (writer/director) and Redbelt (writer/director). Mamet is also the author of Warm and Cold, a book for children with drawings by Donald Sultan, and two other children’s books, Passover and The Duck and the Goat. His most recent books include True and False, Three Uses of the Knife, The Wicked Son, and Bambi Vs. Godzilla.