Review of The Girl Of The Golden West

by Phil Willmott on Tuesday 7 October 2014, 9:22 am in London Theatre Reviews 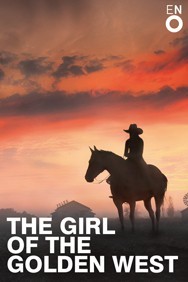 Lovers are well served by London Theatre over the next few weeks.

There’s no more romantic a composer than Puccini, the opera genius behind La Boheme, Tosca, Madame Butterfly... in fact if you’ve got a compilation CD of opera’s greatest hits he’ll have composed the best bits including Nessun Dorma, Pavarotti’s big song with the big notes.

One of Puccinni’s lesser known works, THE GIRL OF THE GOLDEN WEST, is currently being dusted off for a rare revival at the English National Opera. No one is quite sure why we don’t see more productions of it. One theory is that the original music publisher wouldn’t allow recordings for fear it might harm sheet music sales and the piece enjoyed a limited profile as a result. It may also be that there aren’t many sections you can extract that stand on their own in the way that, for example, the aria One Fine Day from Madame Butterfly can light up a concert recital or your trip up the M1 via that compilation.

It’s a wonderful opera that tells the gripping and heart wrenching story of Minnie, virtually the only woman in an isolated Gold Rush, U.S. mountain town.

It turns out we’ve all been missing out. It’s a wonderful opera that tells the gripping and heart wrenching story of Minnie, virtually the only woman in an isolated Gold Rush, U.S. mountain town. In the first act you learn about the lonely, homesick miners and their love for her as she comforts them and “banks” their money in a safe at the back of the salon. Minnie is lonely too and is saving up her first kiss. When a swarthy bandit is on the run and after the cash he pitches up at her cabin in a snow storm and wins that kiss but is Minnie right to trust him?

I loved Susan Bullock in the central role. There’ve been some gripes about her singing in the first half but not from me. I thought she sounded great and I completely bought her bedraggled, raging appearance. No glamour here. This is the type of real and earthy woman who you can imagine surviving in a community of rough men and becoming their surrogate mother.

But the truly wonderful thing about this opera is the lush, almost Hollywood score and as usual at English National Opera there’s a huge, first class orchestra, conducted by Keri-Lynn Wilson that release the full passion in the soaring strings and rumbling percussion.

My heart sank when I read it was to be directed by Richard Jones, who tends to just dump a bucket full of kitsch over everything he stages as if he’s no confidence in the material. Fortunately he’s quite restrained on this occasion, restricting himself to a few completely unnecessary and incongruous 1950’s touches to the set dressing (Set design: Miriam Buether) and the horrible flat lighting he seems to prefer (Lighting design: Mimi Jordan Sherin) But the opera and Minnie’s story is so strong you can ignore his bag of tricks.

One of the more bizarre aspects of the evening is that on several occasions the musicians seemed about to break into numbers from the Phantom of the Opera. The musical borrows several musical themes from Puccini so it came as no surprise to learn that it’s one of Andrew Lloyd Webber’s favourites. I can see why.

I loved Susan Bullock in the central role. I thought she sounded great and I completely bought her bedraggled, raging appearance.

On a much, much smaller scale the 50 seat Union Theatre in Southwark is currently presenting Howard Goodall’s musical based on the 60’s smash hit book and movie, LOVE STORY.

It’s an exquisite production by Sasha Regan beautifully performed by an ensemble led by David Albury and Victoria Serra as the doomed young lovers. It’s not a major piece but it is a beautiful and delicate snapshot of an all too brief courtship and marriage cut tragically short by Leukaemia. It ought to be mawkish but the terrific chemistry between the leading actors and a score that readily celebrates the good times as well as the drama keep things buoyant.

Everyone felt the original production should have run longer in the West End maybe this modest staging will go on to take up residence there. Catch it in this intimate, eccentric theatre space over the next few weeks. I doubt you’ll ever have a more touching and intimate encounter with it.

The Girl Of The Golden West