by Best of Theatre Staff on Friday 3 February 2017, 11:47 am in Cast Changes and Announcements 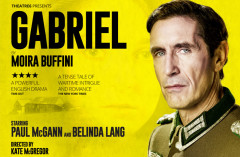 Theatre6 and Catherine Schreiber are delighted to announce further casting for the UK Tour of Moira Buffini’s Gabriel, which opens in London at Richmond Theatre on Tuesday 28 March 2017, with a national press night on Friday 31 March 2017. This will be the 20th anniversary production of Gabriel and is only the second professional production since it was first staged at the Soho Theatre in 1997.

Belinda Lang will be joining the company in the lead role of Jeanne. Belinda is best known for playing Bill in 2 Point 4 Children. Other television credits include The Inspector Alleyn Mysteries, Second Thoughts, Dear John, Justice in Wonderland, The Bretts and To Serve Them All My Days. Belinda has also appeared in many theatre productions including Alan Bennett's Single Spies, The Glass Menagerie, Oklahoma! UK Tour and Hay Fever (Haymarket Theatre and Royal Exchange Theatre).

Jules Melvin will also join the production in the role of Lake. Jules's theatre credits include Private Lives (Hampstead Theatre), The Rose Tattoo (National Theatre) and Othello, Pericles, Much Ado About Nothing, Richard III and The Taming of the Shrew (Shakespeare's Globe).

Belinda and Jules will be joining the previously announced Paul McGann (Withnail and I, Doctor Who and The Monocled Mutineer) as Von Pfunz, Robin Morrissey (Twelfth Night) in the title role of Gabriel, Sarah Schoenbeck (CBBC’s 4 O’Clock Club) as Lily and Venice van Someren (Thérèse Raquin at Southwark Playhouse) as Estelle.

The story of Gabriel is based in 1943 Nazi-occupied Guernsey. Widow and mother Jeanne does whatever it takes to keep her adolescent daughter Estelle and daughter-in-law Lily safe on an island filled with danger and fear. Her toughest test arrives in the form of the terrifying Commander Von Pfunz, whose romantic advances may be the only way to keep her family alive. But tensions intensify when a mysterious young man is washed ashore with no memory of who he is. Fluent in German and English, is he an RAF pilot, an SS interrogator, a local boy with amnesia or a saviour sent from heaven? The stakes are high and getting it wrong means certain death.

Theatre6 is joined by lead producer Catherine Schreiber. Catherine is a Tony Award-winning producer who brought the award-winning The Scottsboro Boys to London. She is currently a producer on Dreamgirls in the West End and a Lead on The Play that Goes Wrong opening April 2017, Broadway and The Life, opening March 2017 in London. They will be joined by co-producers Adam Roebuck (Blithe Spirit West End, and Single Spies UK Tour) and Bruno Wang (Dreamgirls West End, School of Rock West End, and A Streetcar Named Desire Young Vic).