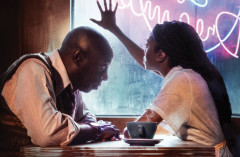 There’s a controversial new president in the White House, and racial tensions are on the rise.

It is Pittsburgh, 1969, and the regulars of Memphis Lee’s restaurant are struggling to cope with the turbulence of a rapidly changing world. The diner is in threat of being torn down, a casualty of the city’s renovation project that is sweeping away the buildings of a community, but not its spirit.

The iconic American playwright August Wilson paints a vivid portrait of everyday lives in this defining moment of American history.

Directed by Nancy Medina, this major revival will introduce this Pulitzer Prize shortlisted modern classic to UK-wide audiences for the first time. Nancy is the recipient of the 2018 RTST Sir Peter Hall Director Award, this year hosted by Royal & Derngate, to enable an emerging director of exceptional potential to direct their first regional mainstage production.

August Wilson(1945–2005) was an American playwright. He won a Pulitzer Prize and a Tony Award for his play Fences and earned a second Pulitzer Prize for The Piano Lesson. His other notable works include King Hedley II, Seven Guitars, Gem of the Ocean, Jitney and Ma Rainey's Black Bottom.

Geoff Aymer plays West. His theatre credits include The Color Purple due to open at Leicester Curve in June, previous credits include Robin Hood and the Arrow of Destiny (Theatre Peckham), The Plague (After La Peste by Albert Camus) (Arcola Theatre), The Importance of Being Earnest (UK tour), A Midsummer Night’s Dream (Young Vic), and To Kill a Mockingbird (Barbican Theatre/ UK tour).

Ray Emmet Brown plays Wolf. His previous theatre credits include Sweet Bird of Youth (Chichester Festival Theatre), Moon on a Rainbow Shawl (National Theatre/UK tour), A Raisin in The Sun (Royal Exchange), and Les Negres (Young Vic). For television, his credits include The Stranger, Mum, The Dumping Ground and Outlaws.

The production is part of Royal & Derngate’s Made In Northampton season, sponsored locally by Michael Jones Jeweller

Use this online pregnancy test to find out if you are expecting a baby. The quiz will take you through a number of questions, and will evaluate if you're expecting or not.