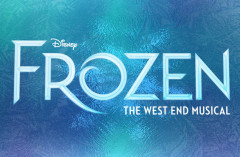 Disney Theatrical Productions today announces public on sale dates for their new production of Frozen in London’s West End. The production will reopen the newly refurbished Theatre Royal Drury Lane, with previews commencing in October 2020. With music and lyrics by Kristen Anderson-Lopez and Robert Lopez, and book by Jennifer Lee, Frozen – directed by Michael Grandage - opens for priority booking late January 2020, with general on sale on 6 March 2020. Groups and schools booking opens on 24 February 2020.

Frozen – produced by Disney Theatrical Productions under the direction of Thomas Schumacher - opened on Broadway in March 2018 and quickly established itself as the biggest musical hit of its season, nominated for the Tony Award® for Best Musical. In addition to the opening in London, the musical recently embarked on a North American tour, and productions will open in Australia and Japan in 2020, and in Hamburg in 2021.

The highest grossing animated film of all time, Frozen was released in cinemas in 2013, winning multiple awards, including two Academy Awards® for Best Animated Feature and Best Original Song ("Let It Go"), the Golden Globe for Best Animated Feature Film and the BAFTA for Best Animated Film. It was written and directed by Jennifer Lee and Chris Buck, withmusic and lyrics by Kristen Anderson-Lopez and Robert Lopez.Currently in cinemas, Frozen 2 had the biggest ever opening for an animated film worldwide and has already made £27.33M at the UK and Ireland box office, with $739M taken globally after just 12 days on release.

Andrew Lloyd Webber’s Theatre Royal Drury Lane, owned and managed by LW Theatres, is closed until autumn 2020 for a landmark £60 million restoration project and will reopen as Frozen begins previews.

Kristen Anderson-Lopez’s theatre credits include In Transit (Broadway), Up Here (La Jolla Playhouse) and Finding Nemo: The Musical (Disney World, running since 2006). For television, her songs include for 87th Academy Awards (Emmy® nomination), The Comedians, and The Wonder Pets. For film, her work includes Disney Pixar’s Coco (Oscar® Best Original Song win for “Remember Me”, Grammy nomination), Frozen (Oscar and Grammy Award® wins for “Let It Go”), Winnie The Pooh, and the recently released Frozen 2. She was a 2014 recipient, and now board member, of the Lilly Awards.

Jennifer Lee is Chief Creative Officer of Walt Disney Animation Studios. She is the Academy Award®-winning writer of Walt Disney Animation Studio’s Frozen, which she also directed with Chris Buck. For her work on Frozen, Lee received numerous awards including a Golden Globe, a Critics’ Choice Award, a BAFTA and an Academy Award®. Most recently, Lee has written and directed Frozen 2.Her Disney Animation career began as co-writer of the Oscar®-nominated Wreck-It Ralph. She also wrote the screenplay for Disney’s 2018 release A Wrinkle in Time.

Michael Grandage is Artistic Director of the Michael Grandage Company in London. For the company he directed Henry V, A Midsummer Night’s Dream, The Cripple of Inishmaan, Peter and Alice and Privates on Parade, Dawn French: 30 Million Minutes, Photograph 51, Red and The Lieutenant of Inishmore, and the feature film Genius with Colin Firth. He was Artistic Director of the Donmar Warehouse (2002–2012) and Artistic Director of Sheffield Theatres (2000–05). He is the recipient of Tony, Drama Desk, Olivier, Evening Standard, Critics’ Circle and South Bank Awards. He has been awarded Honorary Doctorates by the University of London, Sheffield University and Sheffield Hallam University and is President of Central School of Speech and Drama. He was appointed CBE in the Queen’s Birthday Honours 2011. His book, A Decade At The Donmar, was published by Constable & Robins in 2012.

DISNEY THEATRICAL PRODUCTIONS (DTP) operates under the direction of Thomas Schumacher bringing live entertainment events to a global audience of more than 20 million people a year in more than 50 countries. Current London: The Lion King, which recently celebrated its 20th anniversary at The Lyceum, and Mary Poppins at the Prince Edward Theatre. Other London credits: Aladdin, the Olivier-nominated play Shakespeare in Love and DTP’s inaugural production Beauty and the Beast, which won the Olivier Award for Best Musical. Other productions on Broadway and around the world: Frozen, Newsies, Peter and the Starcatcher, The Little Mermaid, Mary Poppins, a co-production with Cameron Mackintosh, TARZAN® and Elton John & Tim Rice’s Aida. Other successful stage musical ventures have included productions of Disney’s High School Musical, Der Glöckner Von Notre Dame in Berlin, and King David in concert.

Worldwide, its ten Broadway titles have been seen by over 200 million theatregoers, and have been nominated for 20 Olivier Awards, winning the honour five times. With 20 productions currently produced or licensed, a Disney musical is being performed professionally somewhere on the planet virtually every hour of the day.

LW Theatres is in the middle of a £60 million restoration project of Theatre Royal Drury Lane. The ambitious scheme not only encompasses the complete refurbishment of the magnificent 1812 Greek Revival ‘front of house’ designed by Benjamin Wyatt, but also the reconstruction of the stage facilities and dressing rooms, the creation of new bars and a restaurant, plus the refashioning of the auditorium to make it able to play in both the traditional proscenium arch and in the round.

The theatre will re-open as ‘The Lane’ in autumn 2020. Whilst Theatre Royal Drury Lane will still showcase world class theatre, front of house facilities will be open to the public all day so the theatre’s iconic interiors can be enjoyed by everyone and not just those headed to a show.