Full casting announced for FROM PAGE TO STAGE at Southwark Playhouse

by Best of Theatre Staff on Wednesday 5 September 2018, 3:39 pm in Cast Changes and Announcements 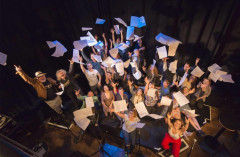 With rehearsals starting today, the full cast has been announced for Aria Entertainment’s prestigious festival of new musical theatre, From Page To Stage(FPTS), which returns with gusto for a 6th successful year from September 2018 at London’s Southwark Playhouse. Jane Deitch has cast the 37-strong company, who will each star in one of the seven brand new musicals featured in the 2018 festival.

Leading the cast of The Astonishing Times Of Timothy Cratchit is Felix Mosse (Aspects of Love, Les Misérables) who will be joined by: Barry James (Beauty and the Beast, Les Misérables); Beverley Klein (Fiddler on the Roof, The Beggar’s Opera); Jessie May (Hair, Mamma Mia!); Rebecca Bolton (Spring Awakening); Gavin James (Sweeney Todd, Whistle Down the Wind); Nicholas Mclean (The Book of Mormon); Cornelius Clarke (The Beaux’ Stratagem, Juno and the Peacock) and Jake Small (Mamma Mia!, Shrek).

The remaining musicals, Villages, Benjamin Button, Smoke and Never Change, will be performed by a repertory cast as part of a showcase evening directed by Bronagh Lagan, with musical direction by Marcus Adams. The cast includes: Simbi Akande (Ghost, A Feast of the Gods); Rosemary Ashe (The Phantom of the Opera, The Witches of Eastwick); David Bardsley (The Grinning Man, Titanic – The Musical); Will Carey (It’s Only Life);Adam Linstead (Les Misérables, Broken Wings);Emma Salvo (The Toxic Avenger, Sincerely, Mister Todd); Lawrence Smith (All The Angels, The Divide) and Benjamin Stratton (The Navigator, Boxed).

With over 150 entries from across the country and internationally, each new musical submitted the show title, lyricist/composer/book writer, a short synopsis and three record tracks and scenes from the show, which were then fully assessed by the From Page To Stage expert literary team who carefully selected the fantastic shows for the 2018 festival.

FPTS are thankful and proud to be sponsored by Harmonia, Cameron Mackintosh, RnH Theatricals, Theatrical Rights Worldwide, WhatsOnStage, AKA and Anthony Field Associates.