New cast for THE CASE OF THE FRIGHTENED LADY

by Best of Theatre Staff on Monday 2 July 2018, 4:26 pm in Cast Changes and Announcements 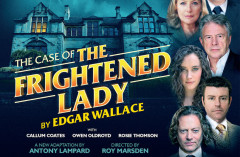 Following the success of its premiere in January 2018, a brand new cast has been announced for the autumn tour of The Classic Thriller Company’s The Case Of The Frightened Lady by Edgar Wallace, led by the talented stage and TV star, John Partridge.

John Partridge who is best known to TV audiences as the suave and charismatic Christian Clarke in EastEnders, leads a star castin the role of Inspector Tanner. John is celebrated as one of musical theatre’s most respected leading men, having starred in major West End hit musicals such as Cats, Starlight Express, Chicago and in Bill Kenwright’s recent lavish musical production of La Cage Aux Folles. John has also been announced to star in the upcoming BBC series of Celebrity MasterChef.

He will be joined by: Deborah Grant, who has starred in Not Going Out and Bergerac; Robert Duncan,best known for Drop The Dead Donkey; Phillip Lowrie, best known for playing Dennis Tanner in Coronation Street; Scarlett Archer from Emmerdale; and Matt Barber from Downton Abbey.

Angus Brown, Gwynfor Jones, Rosie Thomson and Joshua Wichard complete the cast for the autumn 2018 tour of The Case Of The Frightened Lady.

Inspector Tanner is called to investigate a ruthless murder at the grand ancestral home of the Lebanon Family. Navigating a bloodline obsessed patriarch, a groundskeeper with a grudge and two unsettling footmen, Inspector Tanner discovers nothing is quite as it seems. As Tanner moves closer to the heart of the mystery he uncovers a shocking and closely-guarded secret…

Building on the phenomenal decade-long success of The Agatha Christie Company, which sold over two million tickets around the UK, the Classic Thriller Company has produced hits including adaptations from Ruth Rendell and Levison & Link, the writers of Murder She Wrote. Now they bring to the stage a new thrilling chapter from the legendary “King of the detective thriller”, Edgar Wallace.

The production is directed by Roy Marsden whois best known as an actor, particularly in his role as Commander Adam Dalgliesh in ITV's P.D. James series, which he played for 15 years. But he has also been directing plays since he was 15 years old and had successful West End runs with Noel Coward’s Volcano and Agatha Christie’s (under the pen name Mary Westmacott) A Daughter’s a Daughter. This is now Roy’s third time directing a Classic Thriller Theatre Company production having previously directed Rehearsal for Murder and A Judgement in Stone.