Full casting announced for the world première of FRIENDSICAL 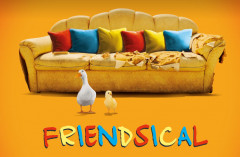 The hilarious parody musical, written by Miranda Larson, will embark on a extensive UK tour, opening at the Everyman Theatre in Cheltenham on 15 July 2019 followed by: Darlington, Derry, Newcastle, Kingston, Malvern, Blackpool, Chelmsford, Southampton and Croydon. Friendsical will also enjoy a full run at the Edinburgh Festival Fringe from 1 – 25 August as part of the Assembly Festival programme in The Assembly Rooms’ Music Hall.

When Ross’ wife leaves him for another woman, he fears he will never find love again. But then Rachel runs back into his life... will he end up with his one true love?

Featuring original songs such as ‘(He’s her) Lobster!’, ‘Richard’s Moustache’ and ‘You’re Over Me? When Were You Under Me?’, the gang take on naked Thursdays, a power cut, and a dinosaur convention.

What could possibly go wrong?

Friendsical is written and directed by Miranda Larsson, with designs by Anthony Lamble, lighting by Dom Jeffery, sound by Julian Butler, musical composition by Barrie Bignold, choreography by Darren Carnall, associate choreography by Michael Vinsen and is produced by Birdbrooke Entertainment ltd.

Jamie Lee-Morgan’s (Ross) stage credits include: War Horse at the New London Theatre, Madagascar The Musical on UK and Ireland Tour, One Man, Two Guvnors at Trinity Theatre, Spamalot at Trinity Theatre, The Comedy of Errors at The Complete Works, Jack and the Beanstalk at Milfield Theatre, Cinderella at Spotlight Theatre and Aladdin on UK Tour.

Sarah Goggin’s (Monica) stage credits include: Sister Act on UK Tour and Kilworth House, Aladdin at Alhambra Theatre, Cinderella at Alhambra Theatre, Bad Girls at The Union Theatre, Christmas in New York with Eden Espinosa at Palace Theatre, London/Manchester, A Different Kind Of Christmas Musical at Leicester Square Theatre, Been on Broadway at Vaudeville Theatre, Sincerely Yours at Landor Theatre, Woman 2 in I Love You You’re Perfect Now Change at Battersea Barge, Best Of Friends at The Landor and Taboo at Brixton Clubhouse.

Duncan Burt’s (Ensemble) stage credits include: The Mob Wife: A Mafia Comedy at The Cockpit, London, Cinderella at Magna Vitae Productions, The Full Monty: The Musical at Old Joint Stock, He Shoots! He Scores! at Above The Stag, Ordinary Days at Old Joint Stock, Dick Whittington and his Cat at The Dancehouse, Myths, Fairytales and Legends at Groombridge Place, Aladdin at The Dancehouse, YOLO at Thwaites Empire Theatre, Speed Dating at The Little Theatre, Hebden Bridge and Little Shop of Horrors at The King’s Arms.

Miranda Larson is a highly experienced writer-director for TV and theatre. A huge fan of the TV Show, Friends, Miranda was inspired to write her own friends-based comedy, The Box Upstairs and it was her first commissioned play in 2004.

Her most recent credits include the adaptation of Tom Fletcher’s Christmasaurus for the Hammersmith Apollo, and the writing and directing of Peter Harris and Deborah Allwright’s The Night Pirates, which opened at the Rose Theatre Kingston and toured the UK. In addition are Cartoon Network Live and Trolls Live currently touring overseas. Other live show credits include the comedies SpongeBob Live & The Amazing World Of Gumball.

Miranda is currently developing Sleepy Hollow for the stage.