Final casting for the world première of TRIOPERAS

by Best of Theatre Staff on Wednesday 9 May 2018, 11:58 am in Cast Changes and Announcements 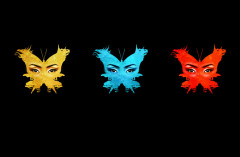 Pamela Tan-Nicholson’sexplosive new production, TriOperas, opens at the Peacock Theatre in under three weeks, and the sensational cast have been taking every ‘opera-tunity’ to rehearse, for the show’s groundbreaking opening. Inspired by three of the best-known female characters in opera, Turandot, Madam Butterfly and Carmen, TriOperas opens on 23 May, for a limited season until 1 July, with press night on 29 May 2018.

Creator, Pamela Tan-Nicholson, has said “The spirit of sharing and learning among all these amazingly talented and motivated artists makes me both inspired and humbled. The team is diverse – some come from the world of classical opera, others from quite different artistic disciplines. What glues them together is a common ethos believing that music, opera included, exists for universal appreciation. We all relish the idea of looking at opera afresh. TriOperas is not a history tour of three fossilized operas. The times they are a-changing, and we say - opera too. My hope is that even people who don’t know or don’t like traditional opera will see the show and come away feeling that they have been properly entertained and emotionally touched by three stories told entirely through dramatic lyrics set to glorious music and performed with no-holds barred action. Opera should be like that – no more no less. Opera is for everyone- of any age - to love.”

In this challenging production, many of the roles are not gender-specific and cast members interchange, understudy and double for each other. The performers require superb vocal skills to meet the demanding vocal repertoire, convincing dramatic authority over a range of extreme emotions, and phenomenal physical discipline to perform dance and stunts.

In 2017, UNESCO granted official patronage to TriOperas to encompass also a complementary onsite exhibition supported by the V&A Museum and the Royal Opera House, TriOperas – Women Power World Opera, the exhibition, will be running at the Peacock Theatre during TriOperas’ run from 23 May – 1 July.

TriOperas provides opportunities for training and students from the Brit School’s different Departments of Study (Music, Musical Theatre, Dance and Technical Production) work with TriOperas mentors in pre-production, curating and rehearsals leading up to the opening of the show.