by Best of Theatre Staff on Friday 3 May 2019, 2:47 pm in Cast Changes and Announcements 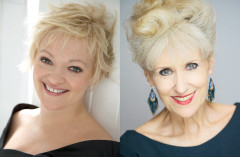 Direct from its sold-out run at the Menier Chocolate Factory, Tony and Olivier award-winning director Trevor Nunn’s ‘exuberant revival’ (Daily Telegraph) of the classic Broadway musical Fiddler on the Roof transfers to the West End for a strictly limited run. The Playhouse Theatre has been specially transformed into an intimate space for this ‘shiveringly intimate chamber musical about family’ (The Times).

Old traditions and young love collide in this joyous and timely celebration of life. Tevye’s daughters’ unexpected choice of husbands opens his heart to new possibilities, as his close-knit community also feel winds of change blowing through their tiny village.

Featuring the iconic score including ‘Tradition’, ‘Matchmaker, Matchmaker’, ‘Sunrise, Sunset’ and ‘If I Were a Rich Man’, and featuring original choreography from Tony Award-winning Jerome Robbins alongside new choreography by Matt Cole, Fiddler on the Roof ‘bursts from the stage’ (Financial Times), bringing new life to one of the most beloved musicals of all time.

Olivier Award-winning Maria Freidman plays Golde. The recipient of three Olivier Awards for Maria Friedman By Special Arrangement at the Donmar Warehouse (1995), Best Actress in a Musical for her performance of Fosca in the West End production of Stephen Sondheim's Passion (1996), and for Ragtime (2003). Her other theatre credits include Merrily We Roll Along, Blues in the Night, Chicago, The Witches of Eastwick, Anna in The King and I at the Royal Albert Hall with the Royal Philharmonic Orchestra, and Lady in the Dark. In 2004 she originated the role of Marian Halcombe in Andrew Lloyd Webber's musical, The Woman in White, both in the West End and on Broadway. She is regularly associated with the work of Stephen Sondheim, having performed principle roles in Merrily We Roll Along, A Little Night Music, Sunday in the Park with George, and as Mrs Lovett in concert performances of Sweeney Todd (Barbican). She also appeared in New York, Washington and the BBC Proms at the Royal Albert Hall, in celebration of Stephen Sondheim's 80th birthday. She has performed her critically acclaimed one woman shows - Maria Friedman - By Special Arrangement and Maria Friedman - By Extra Special Arrangement in venues around the UK and in New York including several seasons at Café Carlyle, and has most recently performed her new solo show From the Heart to sell-out audiences at Crazy Coqs. She has featured on many cast recordings and released several solo albums including Maria Friedman, Maria Friedman Live, Now and Then, and Maria Friedman Celebrates The Great British Songbook. On screen, her roles include Elaine Peacock in EastEnders, Trish Baynes in Casualty, Red Dwarf, the Narrator in Andrew Lloyd Webber's Joseph and the Amazing Technicolor Dreamcoat (DVD), and Mother Abbas on ITV’s Sound of Music Live. In 2013, she made her directorial debut at the Menier Chocolate Factory with Stephen Sondheim's Merrily We Roll Along. The production opened to critical acclaim, winning the Critics’ Circle Award for Best Musical and Olivier Award for Best Musical Revival, transferring to the West End and Boston. Her other directing credits include High Society(The Old Vic) and the world première of the new musical Dusty (Theatre Royal Bath).