by Oliver Mitford on Tuesday 16 September 2014, 4:51 pm in Cast Changes and Announcements 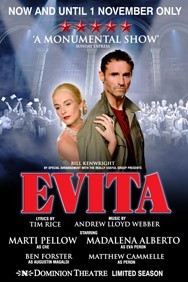 Composed by musical theatre legend Andrew Lloyd Webber and with lyrics by Tim Rice, Evita tells the emotional story of Eva Peron and maps her life from extreme poverty to global icon as the first lady of Argentina and wife of notorious dictator Juan Peron. Evita contains some of musical theatres most iconic songs such as ‘Don’t Cry for Me Argentina’, ‘Another Suitcase in Another Hall’ and ‘Buenos Aires’.

The production received standing ovations on its UK tour earlier this year and now the show opens in the West End for a very limited 55 performances at the old home of Queen musical We Will Rock You – the Dominion Theatre in the centre of London’s Theatreland.