Warwick Davis and Kevin Wood announce return of EUGENIUS! at The Other Palace 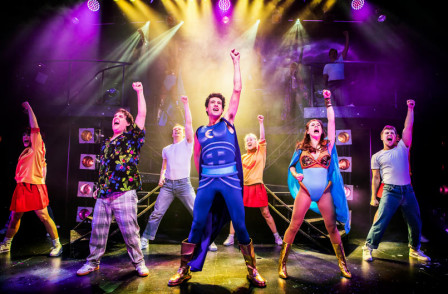 After a triumphant run at The Other Palace at the beginning of the year, Warwick Davis and Kevin Wood are delighted to announce the return of the original British musical “EUGENIUS!” at The Other Palace from1 September to 7 October. Further details and casting to be announced.

After rave audience responses and huge public demand - particularly on social media - the producers are delighted that the show will return to its home, The Other Palace for another run.

Warwick Davis said ‘The clamouring for Eugenius! to return has been so great, it can be heard in another galaxy! We have listened and brought it back. If you missed it last time, this is your chance to see what the buzz is all about. And for our Super Fans out there, we’ll be adding dedicated Sunday performances – exclusively for you! The show returns with our amazing creative team and of course the 80s inspired soundtrack which had audiences on their feet every evening’.

Written by Ben Adams and Chris Wilkins, “EUGENIUS!” tells the story of Eugene, a teenage boy whose nightly dreams of a distant world of heroes and villains may just be the ticket to him creating his very own comic book movie in Hollywood. Joined by his best friends ‘Janey’ and ‘Feris’, our comic writing genius must discover the true meaning of growing up, finding the superhero within, saving the world from both earthbound villains and possibly those from distant galaxies, and along the way, falling in love. The production will continue to play all of the iconic songs including, Go Eugenius!, Comic Book Kind Of Love, Don’t Shoot for the Stars, Future is Bright and Hollywood.