Warwick Davis announces EUGENIUS at THE OTHER PALACE 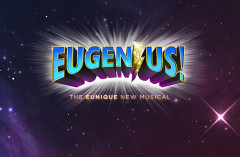 After a successful debut concert performance at the London Palladium last year, Warwick Davis and Kevin Wood are delighted to announce the full-scale production of the British cult musical “EUGENIUS!” at The Other Palace from 22 January until the 3 March 2018.

Written by Ben Adams and Chris Wilkins, “EUGENIUS!” tells the story of Eugene, a teenage boy whose nightly dreams of a distant world of heroes and villains may just be the ticket to him creating his very own comic book movie in Hollywood. Joined by his best friends ‘Janey’ and ‘Feris’, our comic writing genius must discover the true meaning of growing up, finding the superhero within, saving the world from both earthbound villains and possibly those from distant galaxies, and along the way, falling in love.

The production is produced by legendary “Star Wars” and “Harry Potter” actor Warwick Davis and features the voice of Prince Vultan himself, Brian Blessed. Warwick said, “We are thrilled to be bringing an original British musical to The Other Palace. After a tremendous concert performance at the London Palladium last summer we can’t wait to see the fully staged production. Ben and Chris have written this incredible 80’s inspired score and includes the songs 'Go Eugenius' and 'Comic Book Kind of Love', which received popular acclaim last year’.