by Best of Theatre Staff on Thursday 23 August 2018, 10:27 am in Cast Changes and Announcements 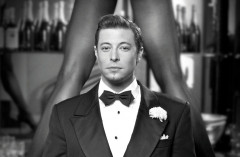 From Monday 10 September 2018, Duncan James will join the West End cast of CHICAGO at the Phoenix Theatre, playing the role of Billy Flynn, a role he originally played in 2008. He will join Alexandra Burke as Roxie Hart, Josefina Gabrielle as Velma Kelly, Mazz Murray as Mama Morton and Paul Rider as Amos Hart.

CHICAGO is booking at the Phoenix Theatre in London’s West End until Saturday 5 January 2019.

Duncan James was most recently seen playing the role of Ryan in the popular Channel 4 soap opera Hollyoaks. For his role as Ryan, Duncan was nominated for Most Popular Newcomer for the 2016 NTA's and is currently nominated for Best Newcomer for the 2017 Soap Awards. Duncan rose to fame as one quarter of the band Blue, which, to date, has had 40 Number One singles worldwide, three Number One UK albums and sales of over 16 million records. Duncan’s television roles include being a presenter on Soapstar Superstar, Capital FM's Party In The Park, City Hospital, T4, The Clothes Show and GMTV’s Entertainment Today. He was a finalist in ITV's Dancing On Ice in 2007, and participated in the subsequent sell-out arena tour. He made his television acting debut in Plus One for Channel 4, and further TV appearances included Grease: The School Musical for Sky 1, Eurovision: Your Country Needs You (as a judge) for BBC1, Eight Out Of Ten Cats for Channel 4, presenting The National Lottery for BBC1 on many occasions, presenting the game show Scream If You Know The Answer on Watch, and being a judge on Channel 5's Don't Stop Believing. His other theatre appearances include Warner Huntington III in the West End production of Legally Blonde at the Savoy Theatre.