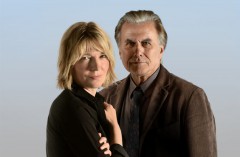 In this powerful, deeply moving, and at times poignantly funny play, Stephanie Abrahams, a brilliant concert violinist who seemingly has it all, is forced to re-evaluate her life when struck down by an unforeseen tragedy. Faced with a truth too difficult to comprehend she consults psychiatrist Dr Feldmann, resulting in a duel between two razor-sharp minds. Tom Kempinski’s dazzling play emerges as an ultimately life-enhancing tribute to the human spirit.

Based on the life of world renowned musician Jacqueline Du Pré, DUET FOR ONE premiered at the Bush Theatre in 1980 with Frances de la Tour and David de Keyser and had great success in subsequent West End and Broadway runs, including a major revival in 2009 starring Juliet Stephenson and Henry Goodman. The film adaptation of DUET FOR ONE, released in 1986, saw Julie Andrews nominated for the Golden Globe for Best Actress.

Jemma Redgrave is best known for her role as Eve Granger in Cold Blood and as Bernie Wolfe in BBC 1’s Holby City. Her extensive television credits include the recurring role of Kate in Doctor Who (BBC 1), Clementine Churchill in Churchill: 100 Days That Saved Britain (ITV 1), Frankie (BBC 1) and Unforgiven (ITV1). Jemma’s theatre credits include a West End revival of Chekov’s The Three Sisters, in which she appeared with her aunts, Vanessa Redgrave and Lynn Redgrave, and Chatsky at the Almeida Theatre. Her film appearances include Love and Friendship, Howards End and Dream Demon.

Actor and writer Oliver Cotton is best known for his role as Cesare Borgia in the BBC series The Borgias. Other recent television credits include Penny Dreadful, Musketeers and Ripper Street. His film credits include The Dark Knight Rises and Shanghai Knights. For stage, in addition to working with the National Theatre, Royal Court and Royal Shakespeare Company, and as well as appearing in Trevor Nunn’s The War of the Roses (Rose Theatre, Kingston), Cotton has appeared in many West End productions, including The Philadelphia Story (Old Vic), Passion Play (Duke of York’s Theatre) and the self-penned Daytona (Theatre Royal Haymarket). Further writing for stage includes The Enoch Show (Royal Court), Scrabble (National Theatre) and his latest play, Dessert, which will have its world première this month, running from 12 July to 5 August at Southwark Playhouse, directed by Trevor Nunn.

DUET FOR ONE will be directed by multi award-winning director Robin Lefevre and designed by Olivier and Tony award-winner Lez Brotherston, with lighting by Ian Scott and sound by John Leonard. The national tour is produced by Lee Dean and Daniel Schumann, in association with Birmingham Repertory Theatre.