Tickets on sale 20 August for DOCTOR WHO: TIME FRACTURE 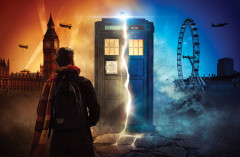 Immersive Everywhere today revealed further details for Doctor Who: Time Fracture, a new immersive theatrical event from the team behind The Great Gatsby, the UK’s longest running immersive show. Officially licensed by BBC Studios, Doctor Who: Time Fracture will take place at Immersive | LDN, a former military drill hall dating back to 1890, from 17 February 2021, with tickets available through to 11 April 2021.

Immersive Everywhere will be offering a free preview of Doctor Who: Time Fracture as a special thank you to care workers at the front line of the coronavirus pandemic. Further details to follow.

1940 – it’s the height of the Blitz. A weapon of unknown origin destroys a small corner of Mayfair, and simultaneously opens up a rift in space and time. For decades, UNIT has fought to protect the people of Earth from the dangers it poses, but they’ve been beaten back as the fracture multiplies out of control.

Earth as we know it is at stake – now is the time for you to step up and be the hero. Travelling to impossible places, confronting menacing monsters and ancient aliens along the way, it’s a journey across space and time to save our race, and our beautiful planet.

Featuring an original story arc, Doctor Who: Time Fracture will invite audiences to become immersed in the world of Doctor Who. Placed at the heart of the story, audiences will meet Daleks, Cybermen, Time Lords and many other strange and mysterious characters as they travel across space and time to discover amazingly realised worlds and undertake a mission to save the universe as we know it.

“We are incredibly excited to be at the creative helm of this project. It has been an enjoyable experience already, working with BBC Studios to make sure Doctor Who: Time Fracture not only meets the extremely high expectations of fans, but exceeds them.

“Drawing from the rich legacy of Doctor Who, which spans over half a century, we are creating an adventure that will entertain both fans that have immersed themselves in the show’s universe for years, and audience members who will walk in from the street having never seen an episode. It’s going to be an absolute blast.”

“We are delighted to be partnering with BBC Studios to bring the incredible universe of Doctor Who to life in a way that only immersive theatre can. We can’t wait for audiences to step into the world of The Doctor, and find themselves closer to the action than ever before, in this expansive and ambitious new show.

Based on everything we know now, we are confident that Doctor Who: Time Fracture will be able to go ahead as planned in early 2021 and will be taking all necessary precautions to ensure the safety of our audiences and full creative team.”

Doctor Who: Time Fracture will take place whilst adhering to the social distancing guidelines announced by the UK Government this month. Immersive Everywhere will also be operating a no-questions-asked exchange policy where customers who are no longer able to attend can exchange their ticket for an equivalent ticket on an alternative date.

Immersive Everywhere will be offering a free preview performance of Doctor Who: Time Fracture as special thank you to care workers at the front line of the coronavirus pandemic. Further details to follow.

Tickets for Doctor Who: Time Fracture are on general sale from 9am Thursday 20 August. £47- £57 plus booking fee.