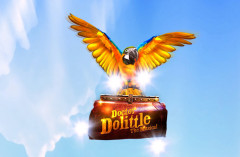 Music & Lyrics Limited, the producers behind the highly successful recent tours of The Addams Family, Chitty Chitty Bang Bang, Oklahoma!, Fiddler on the Roof, High Society and The King and I, in association with Churchill Theatre Bromley, will be producing a new UK & Ireland Tour of Doctor Dolittle, with book, music and lyrics by double Academy Award-winner Leslie Bricusse.

Featuring stunning visual puppetry, this new production, with the book reworked by Leslie Bricusse, will be part of the 50th anniversary celebrations of the original film starring Rex Harrison and will feature the same songs, including the Academy Award-winning Talk To The Animals. Casting to be announced.

The new stage production of Doctor Dolittle will be directed by Christopher Renshaw (Le Grand Mort, Zorro, Taboo, We Will Rock You, The King and I), with design by Tom Piper (Associate Designer at the RSC from 2004 to 2014, and designed the installation for the Tower of London poppies installation and subsequent tours - original concept and Poppies by Paul Cummins), and musical supervision by Mike Dixon (most recent theatre includes Mrs Henderson Presents, Oh What A Lovely War, Bodyguard, Taboo, Hair, Zorro, Never Forget and We Will Rock You).