by Best of Theatre Staff on Saturday 1 September 2018, 12:00 am in Cast Changes and Announcements 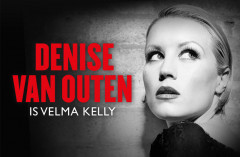 Denise Van Outen will join the West End cast of CHICAGO at the Phoenix Theatre, playing the role of Velma Kelly from Monday 24 September through to Saturday 17 November 2018. Denise will join Alexandra Burke as Roxie Hart, Duncan James as Billy Flynn, Mazz Murray as Mama Morton and Paul Rider as Amos Hart.

UPDATE 10 Sept. 2018: On the day that Denise Van Outen was due to start rehearsals as ‘Velma Kelly’ in Chicago it was discovered that she had suffered a stress fracture in her heel.

Denise will therefore no longer be playing the role from 24 September – 17 November 2018 and her replacement will be announced shortly.

New dates for Denise to return to the show will be announced soon.

CHICAGO is booking at the Phoenix Theatre in London’s West End until Saturday 5 January 2019.

Denise Van Outen returns to CHICAGO to play Velma Kelly having previously played the role of Roxie Hart to critical acclaim in both the West End and on Broadway. Her other West End credits include Tell Me on a Sunday, Legally Blonde, Rent and her one woman show Some Girl I Used to Know. On TV, Denise was a judge on BBC1’s Any Dream Will Do and I’d Do Anything and in 2012 reached the final of Strictly Come Dancing. Her film credits include Love, Honor and Obey and Run for Your Wife.

CHICAGO originally ran in London for 15 years, making it the West End’s longest running revival. It first opened at the Adelphi Theatre on 18 November 1997 to rave reviews and immediately became a sell-out hit.  CHICAGO won the 1998 Laurence Olivier Award for 'Outstanding Musical Production' as well as the 1998 Critics Circle Drama Award for 'Best Musical'. CHICAGO transferred from the Adelphi Theatre to the Cambridge Theatre in April 2006, where it ran for five years until 27 August 2011. The show then opened at the Garrick Theatre on 7 November 2011, where it ran until 1 September 2012.