Danny Dyer and Jo Brand to star in NATIVITY! THE MUSICAL in London

by Best of Theatre Staff on Friday 14 September 2018, 10:59 am in Cast Changes and Announcements 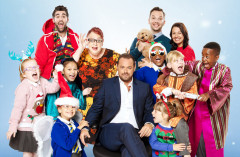 The producers of the smash-hit ‘NATIVITY! THE MUSICAL’ are thrilled to announce Danny Dyer will star as ‘Hollywood Producer’ and Jo Brand as ‘The Critic’ in the London run of the production at the Eventim Apollo, from 19 to 31 December.

Jo Brand will also star as ‘The Critic’ when the show heads to Festival Theatre in Edinburgh from 28 November to 2 December.

Danny Dyer is currently best known for his role as ‘Mick Carter’ in BBC one’s ‘EastEnders’. Danny recently won ‘Best Soap Actor’ at this month’s ‘TV Choice Awards’ and has previously won a ‘National Television Award’ in 2015 and in 2016 for ‘Best Serial Drama Performance’. Danny’s breakthrough role was in cult 90s film ‘Human Traffic’, his other film credits include ‘The Business’ and ‘The Football Factory’. Danny’s previous stage credits Include, ‘Kurt and Sid’ at the Trafalgar Studios, ‘No Man’s Land’ at The National Theatre, ‘Celebration’, ‘Certain Young Men’ and ‘The Homecoming, all at The Almeida Theatre.

Jo Brand is a renowned English comedian, writer and actress and her entertainment career started with an appearance on Saturday Live television show in 1988. Since then she has written and starred in ‘Getting On’ for which she won a BAFTA and has continued to appear on a host of popular panel shows. These include ‘Have I Got News For You’, ‘QI’, ‘Would I Lie To You’ and ‘8 out of 10 Cats Does Countdown’. She is currently the presenter of ‘The Great British Bake Off: An Extra Slice’ on Channel Four and her new book ‘Born Lippy’ will be published next month.

NATIVITY! THE MUSICAL will first open at The Belgrade Theatre, Coventry on Tuesday 23 October 2018 and will then visit Liverpool, Glasgow, Milton Keynes, Nottingham, Edinburgh, Stoke, Oxford before finishing the tour at The Eventim Apollo, Hammersmith from 19 until 31 December. Full venue and on sale details below. Casting to be announced soon.