by Best of Theatre Staff on Friday 4 August 2017, 9:50 am in Cast Changes and Announcements 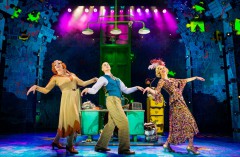 Today Michael Harrison and David Ian, Producers of the West End production of Annie are delighted to announce that from 18 September to 26 November 2017, Craig Revel Horwood will join the West End Company to play the role of Miss Hannigan for 10 weeks. In addition, it is announced today that Nikolai Foster’s production will extend booking at the Piccadilly Theatre to 18 February 2018.

Best known on television as a judge on the BBC’s Strictly Come Dancing and for a role he returns to this Autumn, Craig Revel Horwood received great critical acclaim in Foster’s production of Annie that toured the UK in 2015. Previously in the West End he has performed the role of Munkustrap in Cats, was Dance Captain in Miss Saigon and played the role of Harry in Crazy for You. His production of Son of a Preacher Man will open in Bromley in September before embarking on an extensive UK tour. During his 10-week run, because of his Strictly Come Dancing commitments, Craig Revel Horwood will not play the role of Miss Hannigan on Saturdays.

Craig Revel Horwood said: “I am so pleased to be returning to the West End, especially to a role I had such a brilliant time performing on tour. Miss Hannigan is evil, sassy and fab-u-lous. It will be a real challenge for me not to take her man-hungry, wicked ways to the Strictly judging panel each Saturday night - though I am sure my fellow judges will keep me in check! I can’t wait to get started.”