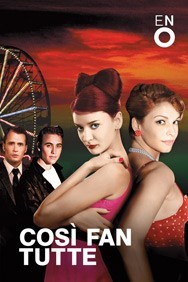 Most people don't associate opera with romantic comedy but ten days after the grand misery of The Thebans I was back at the Coliseum to enjoy English National Opera in a much more playful mood.

For the next few weeks you can catch director PheIim McDermott's spectacular production of Mozart's loveliest opera Cosi Fan Tutte.

Not much happens in the story and very slowly but the twists and turns of true love are accompanied by such sublime music that you'll be transported as the sumptuous tunes swoop, linger and climax.

Sublime music that will transport you as the sumptuous tunes swoop, linger and climax

There are only six characters; two couples daring to test the limits of their fidelity and two mischief makers determined to coax the love birds into compromising situations for the sheer malicious pleasure of seeing them sweat.

Don Alfonso persuades the two boyfriends to pretend to go off to war but return disguised in order to see if the girls will remain faithful to fresh advances by apparent strangers. The females are egged on by the mischievous maid, Despina.

There's a date-night, holiday atmosphere to proceedings which over the centuries since it was written has inspired designers and directors to set it in all kinds if glamorous locations.

On this occasion the shenanigans take place at the Coney Island fun fair in the 1950s. Tom Pye’s set is bursting with posters for carnival freaks and garish rides. This gives everything a delicious bitter sweet edge. Yes, the couples ultimately have fun but this production doesn't let us forget the torture love can be and casual cruelty of lovers towards one another.

The dark side of the production is also brought to the fore with an ensemble of the kind of people exhibited as curiosities in Coney Islands past. There are dwarfs, strong men, Siamese twins, a bearded lady, a “giant”, etc. all seem to be witnessing a purity of love they'll never know and they haunt the set, moving scenery and dispassionately watching the antics of the picture perfect central couples they can never be. It's very effective almost as if we watch the opera on their terms.

There's a terrific opening sequence when this troupe, described in the programme as the Skille Ensemble, climb, one by one out of an impossibly small trunk and hold up placards about what we’re about to see, swapping places to change the meanings and very much claiming the evening as their story.

Later they even push the fairground rides including two little boats in the shape of gigantic swans that transport our lovers through the tunnel of love represented by others manipulating a series of heart shaped frames that become the walls of the ride.

The British baritone, Roderick Wilson plays the manipulative Don Alfonso with considerable panache, enjoying every moment of his role of puppet master twisting the four lovers around his little finger for entertainment. His shimmering red sequined suit, making him appear all the more demonic, drew a gasp from the audience. The early scenes in which he taunts the men with the idea of their girlfriends cheating takes place in a booth at nightclub and feels incredibly plausible and contemporary for something written in the 18th century.

Kate Valentine and Christine Rise are the young women goaded into flirting with their own boyfriends who return to them disguised. They could easily have looked week and foolish but these assured performers make certain the girls are spunky and ingenious whist the witty and sophisticated music Mozart writes for them guarantees we always respect these sisters.

They’re tormented by Mary Bevan as Despina the maid, an impressive performance that calls on her to assume various disguises, notably a nutty professor and a Vegas style lawyer who proposes to marry everyone at the height of the mix up.

The male lovers are Marcus Farnsworth as Guglielmo and Randall Bills as Ferrando. They manage to convince both as strutting officer types and as their dodgy alter egos pursuing the girls with the composer’s sunshine infused score.

In fact the music is so rich and varied that it comes as some surprise when only 6 singers take a curtain call on the huge stage. It feels like you’ve been watching far more.

The scenery and witty direction ensure that this scrumptious piece of classical opera is as fast moving and engaging as any modern musical.