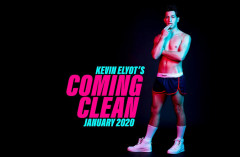 The King’s Head Theatre, Making Productions and RGM Productions are delighted to announce the full cast for the return of Kevin Elyot’s Coming Clean to Trafalgar Studios 2.

Lee Knight will star as Tony. His theatre credits include A Very Very Very Dark Matter (The Bridge Theatre), Adam & Eve (Hope Theatre) and Much Ado About Nothing (Wyndhams Theatre, West End). Film credits include Harry Potter and The Goblet of Fire, The Spiritualist, Away With Me, Misrule, and The Doorman.

Elliot Hadley will play the role of William / Jurgen. He was an original cast member of the award-winning verbatim drama 5 Guys Chillin’ and, after touring with it nationally and internationally (New York’s Soho Playhouse), won the Micheál Mac Liammóir Award for Best Male Performance. Previous performing credits include Alfred Cummins in the BBC’s Preston Passion, Dark Matters for Discovery Channel USA, Thomas Kyd in The Dead Shepherd, ITV's The Halcyon, and Far From The Madding Crowd with Michael Sheen and Carey Mulligan.

Stanton Plummer-Cambridge will play Greg. He has recently appeared in Macbeth, The Tempest (Southwark Playhouse), Queers (King’s Head Theatre), Richard III, Much Ado About Nothing (Handlebards Summer Tour), and As You Like It (Shakespeare in the Squares). His television and film credits include Black Earth Rising (BBC), The Durrells in Corfu (ITV) and Have We Met Before (BBC 4, BFI Born Digital Series).

Jonah Rzeskiewicz will play the role of Robert. He graduated from RADA only this year. Coming Clean will mark his West End and professional London debut. His previous theatre credits include Edward II (Royal Exchange Theatre, Manchester). He will soon appear in Kenneth Branagh’s Death On The Nile and Netflix’s The Dig, both to be released in 2020.

In 2017, Adam Spreadbury-Maher directed the 35th anniversary production and the first London revival of Coming Clean, Kevin Elyot’s first play, which transferred to Trafalgar Studios 2 earlier this year. The play premiered at the Bush Theatre on 3 November 1982. Coming Clean looks at the breakdown of a gay couple’s relationship and examines complex questions of fidelity and love.

The play is set in a flat in Kentish Town, north London, in 1982. Struggling writer Tony and his partner of five years, Greg, seem to have the perfect relationship. Committed and in love, they are both open to one-night stands as long as they don’t impinge on the relationship. But Tony is starting to yearn for something deeper, something more like monogamy. When he finds out that Greg has been having a full-blown affair with their cleaner, Robert, their differing attitudes towards love and commitment become clear.

In his foreword to Kevin Elyot: Four Plays (Nick Hern Books, 2004), Elyot writes, “From 1976 to 1984 I'd acted in several productions at the Bush Theatre, and Simon Stokes, one of the artistic directors, had casually suggested I try my hand at a play. I presented them with a script entitled Cosy, which was passed on to their literary manager Sebastian Born. He responded favourably and, largely through his support, it finally opened on 3 November 1982 under the [new] title Coming Clean.”

Written 12 years before his most famous play, My Night With Reg, Coming Clean won Elyot the Samuel Beckett Award for writers showing particular promise in the field of the performing arts.

Theatre critic Michael Coveney wrote of Elyot in his obituary for The Guardian in 2014, “In writing about the human heart and the art of living... Elyot transcended categorisation and produced a small body of stage plays that will reward revival, and not just as period pieces.” Coveney goes on to describe Coming Clean as “an elegiac play about sexual relationships at a time when Aids was still a barely credible rumour in Britain, but there was a sense of foreboding in the final scene.”

Coming Clean is directed by Adam Spreadbury-Maher, with set designed by Amanda Mascarenhas and lighting by Nic Farman.

This productionis being produced in the West End by King’s Head Theatre, Making Productions and RGM Productions in association with DeVere Productions.