by Best of Theatre Staff on Friday 10 January 2020, 1:57 pm in Cast Changes and Announcements 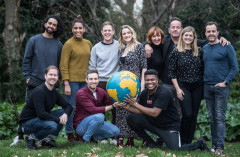 As the Olivier Award-winning “Best New Musical” Come From Away enters its second year in the West End, it welcomes new cast members from Monday 10 February 2020. This joyous musical tells the remarkable true story of 7,000 stranded air passengers during the wake of 9/11, and the small town in Newfoundland that welcomed them. Cultures clashed, and nerves ran high, but as uneasiness turned into trust, music soared into the night and gratitude grew into enduring friendships.

On 11 September 2001 the world stopped. On 12 September, their stories moved us all.

The multi award-winning musical continues sold-out, record-breaking engagements on Broadway, in Canada, in Australia and on a 60-city North American Tour. It has recently been announced that a tour of China will commence in Shanghai from May 2020, and a feature film adaptation is in the works.

The new cast of Come From Away in the West End will include Tarinn Callender (Bob and others), James Doherty (Claude and others), Alice Fearn (Beverley/Annette and others) Kate Graham (Diane and others), and Alasdair Harvey (Nick/Doug and others), with Ricardo Castro, Stuart Hickey, Sorelle Marsh, Micha Richardson and Matthew Whennell-Clark.

Come From Away was originally co-produced in 2015 by La Jolla Playhouse and Seattle Repertory Theatre, and presented in 2016 by Ford’s Theatre in Washington DC and Mirvish Productions at the Royal Alexandra Theatre in Toronto, Canada, all in partnership with Junkyard Dog Productions. Come From Away (NAMT Festival 2013) was originally developed at the Canadian Music Theatre Project, Michael Rubinoff Producer, Sheridan College in Oakville, Ontario, Canada, and was further developed at Goodspeed Musicals’ Festival of New Artists, in East Haddam CT. The Canada Council for the Arts, the Ontario Arts Council and the 5th Avenue Theatre in Seattle WA also provided development support.

Come From Away is produced in the UK by Junkyard Dog Productions and Smith & Brant Theatricals. The European premiere of Come From Away was co-produced with the Abbey Theatre, Ireland’s National Theatre.

Come From Away tickets are available from £17.75.