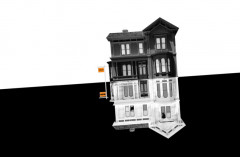 Having had to shut down the production of Bruce Norris’ seminal play Clybourne Park at final dress rehearsal in March 2020, Trish Wadley Productions and David Adkin, in association with Park Theatre, are delighted to announce that the production, originally planned for the play’s 10th anniversary year, will open at the venue in March. Oliver Kaderbhai reunites Michael Fox (Jim/Tom), Andrew Langtree (Karl/Steve), Richard Lintern (Russ/Dan), Imogen Stubbs (Bev/Kathy) and Eric Underwood (Albert/Kevin) from the 2020 company, with further casting to be announced. The production opens on 21 March 2022, with previews from 16 March, and runs until 23 April.

Winner of both the Tony and Olivier Award for Best Play and the Pulitzer Prize for author Bruce Norris, Clybourne Parkis a razor-sharp satire about the politics of race and real estate. The play returns to London following sell out runs at The Royal Court and in the West End.

In 1959, Russ and Bev are moving to the suburbs after the tragic death of their son and have sold their house to the neighbourhood’s first black family.

Decades later, the roles are reversed when a young white couple buys the lot in what is now a predominantly black neighbourhood, signalling a new wave of gentrification. In both instances, a community showdown takes place – are the same issues festering beneath the floorboards fifty years on?

Michael Fox plays Jim/Tom. For theatre his credits include All in a Row, A Lie of the Mind (Southwark Playhouse), An Enemy of the People (Chichester Festival Theatre), As You Like It (Transport Theatre), Leaves of Glass (Alma Tavern) and Edmund Kean (Watford Palace Theatre). For television his credits include Bombing Auschwitz, Endeavour, Downton Abbey, Marvellous, The Ark, New Worlds; and for film, Downton Abbey, Dunkirk, Good People and the forthcoming Downton Abbey: A New Era.

Andrew Langtree plays Karl/Steve. His theatre work includes Stages (The Vaults), A Christmas Carol (The Old Vic), The Secret Diary of Adrian Mole (Ambassador’s Theatre), Troilus and Cressida (RSC), Imperium (RSC and Gielgud Theatre), The Wizard of Oz (Sheffield Theatres), Albert’s Boy (Orange Tree Theatre), The Hypocrite (RSC and Hull Truck), Treasure Island (Birmingham Rep), Groundhog Day (The Old Vic), Cat on a Hot Tin Roof (Theatr Clwyd) and Oppenheimer (RSC and Vaudeville Theatre). For television, his work includes The Tower, The Royal and Cutting It, and as Jason Gallagher in Emmerdale and Leon in Coronation Street; and for film, Matilda and Delovely.

Eric Underwood plays Albert/Kevin. He was a soloist with the Royal Ballet, where he created many roles including in Wayne McGregor’s Chroma, Infra and Raven Girl and in Christopher Wheeldon’s DGV, as well as the Caterpillar in Wheeldon’s Alice’s Adventures in Wonderland. He has worked for the BBC across radio and television presenting shows including Can Hip Hop Save Ballet (BBC R4) and Inside Out – Ballet Boys (BBC One). For film, his work includes Cats.

Bruce Norris is an American playwright who lives in New York. He is the author of Clybourne Park, which premiered at Playwrights Horizons in New York, in 2010, before transferring to the Royal Court Theatre, Broadway, and the West End. His other plays include The Infidel (2000), Purple Heart (2002), We all Went Down to Amsterdam (2003), The Unmentionables (2006), A Parallelogram (2010) and Downstate (2018) which were all first produced by Steppenwolf Theatre Company in Chicago;The Pain and the Itch (Playwrights Horizons, Steppenwolf, 2004, Royal Court Theatre, 2007; The Low Road (Royal Court Theatre, 2013), Domesticated (Lincoln Center, 2013), and The Qualms (Playwrights Horizons, 2014). He is the recipient of the Pulitzer Prize for Drama (2011), Tony Award (Best Play, 2012), Joseph Jefferson Award (2003, 2005, 2019), the Steinberg Playwright Award (2009) and the Whiting Foundation Prize for Drama (2006). As an actor he can be seen in the films A Civil Action, The Sixth Sense among others.

Oliver Kaderbhai is an actor, director, producer and founding Artistic Director of DELIRIUM. His experience in the UK spans Fringe to the West End working with actors such as Andrew Scott, Kate Fleetwood, James Norton and Orlando Bloom, and he has created six productions with DELIRIUM which have sold out venues across the UK. Director credits include Striking 12 (Union Theatre), Songs of Abdulkarim (59 Productions), Peter Pan (Co-Director, Chichester Festival Theatre), One Minute (The Vaults), The Provok’d Wife (Go People), From Where I’m Standing (Pegasus Theatre), Oranges on the Brain (Pegasus Theatre), Go To Your God Like A Soldier (Old Vic Tunnels) and Your Nation Loves You (Old Vic Tunnels). Movement Director credits include Killer Joe (Trafalgar Studios), The Dazzle (Found 111), BUG (Found 111), Almost Maine (Park Theatre), Phenomena (The Albany), Dhow Under The Sun (KSF/META, UAE); and Assistant or Associate Director credits include Jesus Christ Superstar, Running Wild (Regent’s Park Open Air Theatre) and Guys and Dolls (Playmakers Rep, USA).