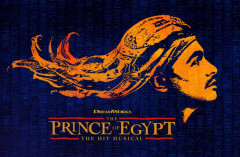 THE PRINCE OF EGYPT, the hit musical based on the classic DreamWorks Animation film, is delighted to announce that Olivier Award-winner and ‘Tracy Beaker’ star Clive Rowe will join the company as ‘Jethro’ for a limited engagement from Thursday 1 July to Saturday 16 October 2021.

From his celebrated debut performance as ‘Mr Snow’ in Nicholas Hytner’s production of Carousel to his Olivier Award-winning performance as ‘Nicely-Nicely Johnson’ in Richard Eyre’s revival of Guys and Dolls, Clive Rowe is one of the UK’s most prolific and popular stage actors. He has also been an enduring presence on children’s television for the past two decades with his many starring roles including four seasons as ‘Norman “Duke” Ellington’ in Jacqueline Wilson’s award-winning The Story of Tracy Beaker (CBBC); two seasons as ‘Mayor Doyle’ in The Evermoor Chronicles (Disney Channel) and four seasons as ‘Mr Salford’ in So Awkward (CBBC). His additional television and film appearances include ‘David Palmer’ in the comedy The Kennedys (BBC); ‘Clifford "Shrek" Beale’ in All The Small Things (BBC); ‘Morvin Van Hoff’ in Doctor Who: Voyage of the Damned (BBC), with David Tennant and Kylie Minogue, and ‘Cuisinier’ in Disney’s live-action Beauty and the Beast. Clive is a patron of the Hackney Empire, where he has made countless acclaimed pantomime performances. He was awarded an MBE in 2017.

“This lavish stage adaptation” (The Guardian) features a cast and orchestra of almost 60 artists and Stephen Schwartz’s acclaimed score includes his Academy Award®-winning song When You Believe, which was a global hit for Whitney Houston and Mariah Carey, and the “spine-tingling” (Time Out) Deliver Us. The Original Cast Recording, released by Ghostlight Records, received a 2021 Grammy® Award nomination for `Best Musical Theatre Album’.

Stephen Schwartz’s enduringly popular musical Godspell will celebrate its 50th Anniversary on Monday(17 May 2021).He was 23 when it premiered at New York’s Cherry Lane Theatre in 1971.

The Prince of Egypt has music and lyrics by multi-Grammy® and Academy Award®-winner Stephen Schwartz (Wicked, Pippin, Godspell), a book by Philip LaZebnik (Mulan, Pocahontas) and features 10 brand new songs written by Stephen Schwartz together with 5 of his beloved songs from the DreamWorks Animation film (When You Believe, Deliver Us, All I Ever Wanted, Through Heaven’s Eyes and The Plagues).