by Best of Theatre Staff on Monday 4 December 2017, 3:02 pm in Cast Changes and Announcements 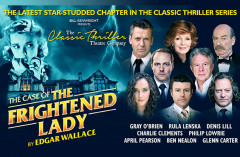 Edgar Wallace’s The Case of the Frightened Lady opens at Theatre Royal Windsor on Wednesday 10th January 2018 followed by a nationwide tour. It is adapted by Antony Lampard and directed by Roy Marsden with design by Julie Godfrey, lighting design by Chris Davey and sound design by Dan Samson.

EDGAR WALLACE is one of the most popular and prolific crime writers of the 20th Century and the brains behind the iconic film, KING KONG. Having written more than 150 detective novels throughout his career EDGAR WALLACE’S gripping page-turners are regarded as the bedrock of the modern thriller, and The Case of the Frightened Lady remains one of his most celebrated works.

When Inspector Tanner is called in to investigate a ruthless murder at Mark’s Priory, the grand ancestral home of the Lebanon family, he quickly discovers that nothing is quite as it seems. The household is controlled by the family physician, the footmen behave more like guests than servants and the secretary Isla is afraid for her life. As Tanner moves closer to the heart of the mystery he uncovers a shocking and closely guarded secret...

GRAY O’BRIEN is best known to TV audiences for his portrayal of the villainous businessman Tony Gordon in ITV’s Coronation Street and as Dr. Richard McCaig on the BBC medical drama Casualty. Most recently he starred in ITV crime drama The Loch which aired earlier this year. Other notable roles include Peak Practice, Taggart and the 2006 film The Queen.

With a career spanning more than 40 years across film, radio and stage, RULA LENSKA is one of Britain’s best- loved actresses. Her big break came in 1976 appearing in Rock Follies and the follow up Rock Follies ’77. Since then she has starred in countless TV series including the iconic Doctor Who, Minder, One Foot in The Grave and Take a Letter Mr. Jones as well as EastEnders andCoronation Street.

DENIS LILL who starred as the much-loved character of Mr Rose in the long-running TV series The Royal has appeared in many popular television series from Z Cars, Doctor Who, Bergerac and Blackadder to the classic British comedy Only Fools and Horses. He also appeared in the 1989 blockbuster movie Batman and the 1996 film adaptation of Evita.

CHARLIE CLEMENTS captured the nation’s heart as Bradley Branning in EastEnders, a role that won him many soap and television awards, including Most Popular Newcomer at the National Television Awards and Best Soap Actor at the TV Quick Awards. Charlie’s dramatic exit from the soap came in the 25th Anniversary Live Episode.

Joining them is PHILIP LOWRIE, best known for playing one of the original characters, Dennis Tanner in Coronation Street, a role he played since the shows inception in 1960 until 1968, and again in 2011 until 2014. He also appeared in the television series War & Peace, Rules of Engagement and Home Fires.

BEN NEALON is an Agatha Christie Company and Classic Thriller Company stalwart. On television Ben is best known as Lt Forsythe in the popular ITV award-winning drama series Soldier Soldier, and for his appearances in The Bill, Casualty, Doctors and EastEnders. He also featured in the Oscar-nominated Lagaan: Once Upon a Time in India.

APRIL PEARSON made her television debut when she was just 9 years of age in the long-running medical drama Casualty. Her big break came in the hugely popular BAFTA award-winning TV drama Skins as Michelle Richardson. Her film debut came just a few years later in Tormented opposite Alex Pettyfer.

Completing the line-up is West End leading man GLENN CARTER. Carter has appeared in some of the biggest West End musicals such as Joseph and The Amazing Technicolor Dreamcoat, Whistle Down the Wind, Grease and Les Miserables, as well as playing Tommy DeVito in the London premiere of Jersey Boys. His most memorable portrayal is perhaps as Jesus in the Tim Rice and Andrew Lloyd Webber classic Jesus Christ Superstar. He played the role in the West End, on Broadway and in the Film.

The cast is completed by Callum Coates, Owen Oldroyd and Rosie Thomson.

The production is directed by ROY MARSDEN who is best known as an actor, particularly in his role as Commander Adam Dalgliesh in ITV's P.D. James series, which he played for 15 years. But he has also been directing plays since he was 15 years old and had successful West End runs with Noel Coward’s Volcano and Agatha Christie’s (under the pen name Mary Westmacott) A Daughter’s a Daughter. This is now Roy’s third time directing a Classic Thriller Theatre Company production having previously directed Rehearsal for Murder and A Judgement in Stone.