by Best of Theatre Staff on Wednesday 26 June 2019, 12:55 pm in Cast Changes and Announcements 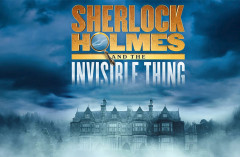 Holmes and Watson are called to investigate a murder seemingly committed by an invisible perpetrator. As they probe into the mysterious lakeside drowning, something startling emerges…

A perplexed Inspector Peacock summons Holmes and Watson to the home of Miss Lucy Grendle, the daughter of the late Alfred Grendle – a man with a shadowy past. Miss Lucy Grendle has a problem with vodka (and Sherlock Holmes). The last time their paths crossed, it did not end well. Tension is in the air, and it’s not just because an Invisible Thing is prowling the house.

The play was originally performed at the Tabard Theatre in 2016 and has been revised and restaged for the current run.

Greg Freeman’s credits include Kathmandu performed at the Menier Chocolate Factory and Pleasance Edinburgh, Dogstar, Montagu, Empty Vessels and the co – adaptation of Conan Doyle’s first Sherlock Holmes book A Study in Scarlet for the stage. His credits also include the critically acclaimed Doig! The Musical, No Picnic and Beak Street. Credits for television include the adaptation of the American sitcom Who’s The Boss into ITV’s The Upper Hand.

Stephen Chance plays Sherlock Holmes. He has played Sherlock Holmes twice previously in The Hound of Baskerville and The Final Problem (Gasworth Hall).His previous theatre credits include Boeing Boeing (The English Theatre of Hamburg), Widower’s Houses (Sartorius Theatre)and Simpatico (Tabard Theatre). His television credits include Castles in the Sky. Film credits include Me Before You.

David Phipps-Davis is a writer and director. Previous credits as a director include See Me For Myself, An Ideal Husband (Tabard Theatre), Le Comte Ory, Macbeth, L’elisir d’amore (Dorset Opera Festival), Cinderella (Regent Theatre, Ipswich) and Who Will Carry The World? (Brockley Jack Theatre). Credits as a writer include Beauty and The Beast (UK tour), Sleeping Beauty, Dick Whittington (Dorking Halls) and Cinderella (Harlow Playhouse).