Open Auditions Announced for BRING IT ON THE MUSICAL 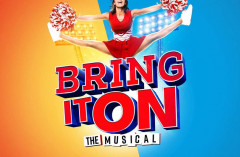 Selladoor Worldwide today announced that they will be holding open auditions for the upcoming UK Tour of BRING IT ON THE MUSICAL. Open auditions will be held on Wednesday 22 January between 10.00am and 6.00pm at The Place, 17 Duke’s Road, London WC1H 9PY.

The producers are looking for all-round performers from all backgrounds who may have non-traditional skill sets with a focus on cheerleading and acrobatics/gymnastics. All performers must have an excellent base in street dance and urban techniques with strong vocal ability. The producers are especially looking for performers who do not have agent representation and might not usually get the opportunity to be seen via traditional casting avenues. Whilst artists of all ethnicities will be considered for the production, it is a requirement of the show for the majority of the company to reflect a range of BAME backgrounds.

Performers with agent representation who feel they have the skillset required are encouraged to ask their agents to submit them for audition via the Spotlight Breakdown currently live.

Following the open auditions on 22 January, recalls will be held on 24 January in Deptford. All performers will receive an answer on the day or via email notifying them of the outcome of their audition. These auditions will be filmed for archival and promotional use. Artists must be available for rehearsals from April 2020 to then join the show until December 2020 inclusive. All applicants must be over 18 and have a valid UK/EU passport or have the full working visa for the duration of the contract before applying.

BRING IT ON THE MUSICAL takes audiences on a high-flying, energy fuelled journey which tackles friendship, jealousy, betrayal and forgiveness – wrapped up in explosive choreography and tricks.

Cheer-royalty and newly crowned Squad Captain, Campbell, should be embarking on her most cheertastic senior year at Truman High School. But when she’s forced to move to the neighbouring hard-knock Jackson High, Campbell fears her life is over. But an unlikely friendship catapults Campbell back into contention with a powerhouse squad and the fire to achieve the impossible.

BRING IT ON THE MUSICAL is produced by Selladoor Productions, has a libretto by Jeff Whitty, a score by Tom Kitt and Lin-Manuel Miranda lyrics by Amanda Green and Lin-Manuel Miranda. BRING IT ON THE MUSICAL is inspired by the motion picture Bring It On written by Jessica Bendinger. Performed by arrangement with Music Theatre International (Europe) Limited.