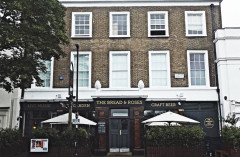 The Bread & Roses Theatre is thrilled to announce Velenzia Spearpoint as their new Artistic Director. As of April 2018 she will take over from Tessa Hart, who is moving on to work for the Astrid-Lindgren-Bühne in Berlin whilst also staying involved as a Co-Executive Director of The Bread & Roses Theatre. Velenzia will be working alongside current Managing Director Rebecca Pryle.

The Bread & Roses Theatre is a 40- to 60-seat innovative fringe venue developed since 2012 and officially launched in November 2014 by Rebecca Pryle and Tessa Hart, located above The Bread & Roses Pub in Clapham. Artistic quality, equality and diversity are at the forefront of the theatre's programming, which features visiting companies as well as in-house productions, with a focus on new writing, underrepresented voices and distinctive work. Having seen over 35,000 audience members through its doors to date, the theatre has worked with award-winning ensembles with decades of experience but also frequently welcomes emerging companies taking their first steps and supports theatre-makers by providing box office split deals with no hidden fees. In every full year of its existence the theatre has been a recipient of the ICWP 50/50 Applause Award for Theatre Gender Parity and the press has described it as 'one of the most exciting ones amongst the London pub theatres’ (RemoteGoat), 'an extremely ethical organisation' (London Pub Theatres Magazine), and 'a new wave of venues (....) – all on the sort of sweetheart deals of old.’ (The Guardian).

Velenzia Spearpoint: “The Bread & Roses Theatre is everything I love about the London fringe scene and I am beyond grateful for this wonderful opportunity. I look forward to welcoming more innovative theatre companies to The Bread & Roses and continuing to champion diversity, equality and progressive art at this incredible space I can now call home.”

Rebecca Pryle: “It has been a real delight to work with Tessa these past six years, building and growing a theatre we are very proud of today. As sad as I will be to see Tessa go, I am thrilled that we have given another great woman, Velenzia Spearpoint, the opportunity to step up as Artistic Director and I look forward to working closely with her as we continue to grow and develop the theatre and company.”

Tessa Hart: “Growing the theatre has been an incredible journey so far and when I decided to move on to Berlin, we knew immediately that Velenzia - based on her creative work, skill set and commitment to the theatre - would be the ideal candidate to help lead and build up The Bread & Roses Theatre in the coming years to continue providing a diverse and equitable hub for artists and audiences.”