by Best of Theatre Staff on Tuesday 6 November 2018, 12:20 pm in Cast Changes and Announcements 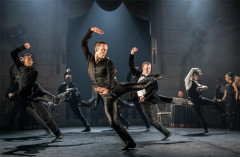 New Adventures is delighted to announce casting for ‘The Swan’ and ‘The Prince’ in Matthew Bourne’s new production of his legendary “SWAN LAKE” at Sadler’s Wells from Tuesday 4 December 2018 to Sunday 27 January 2019.

The Royal Ballet’s newest Principal Dancer, Matthew Ball, will be joining New Adventures for the entire London season of Matthew Bourne’s “SWAN LAKE” at Sadler’s Wells in the role of ‘The Swan’. Matthew will be making his debut with New Adventures and will dance four performances each week during the eight-week season at Sadler’s Wells. This year he also made his debut as ‘Prince Siegfried’ in The Royal Ballet’s new production of “Swan Lake” at the Royal Opera House. Matthew Ball joins New Adventures star Will Bozier, who most recently danced to great acclaim as ‘Harry, the Pilot’, in Matthew Bourne’s “Cinderella” and former English National Ballet star Max Westwell who was also recently seen in the West End in “An American in Paris”. Will and Max are both making their debuts in the role of ‘The Swan’ and will perform throughout the UK and International tour.

Returning to the role of ‘The Prince’ are two much loved New Adventures stars, Liam Mower (recently wowing audiences as ‘The Angel’ in “Cinderella”) and Dominic North (acclaimed star of “Edward Scissorhands”, “The Car Man”, “Sleeping Beauty”, “The Red Shoes” and “Cinderella”). They are joined by New Adventures newcomer, 19 year old James Lovell, who is making his professional debut in this production.