by Best of Theatre Staff on Monday 1 July 2019, 2:30 pm in Cast Changes and Announcements 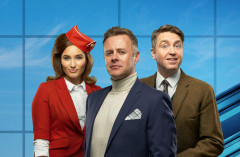 Dan Looney, Adam Paulden and Jason Haigh-Ellery for DLAP Entertainment are delighted to announce that Susie Blake will play Bertha and Emily Head will play Gretchen in the national tour of the classic West End and Broadway smash hit comedy BOEING-BOEING opening at Brighton Theatre Royal on 4 September 2019. They join the previously announced Tom Lister as Bernard and Daniel Casey as Robert. Full casting to be announced soon.

Susie Blake is best known for her portrayals of the snobbish TV announcer in Victoria Wood’s As Seen On TV and the role of Bev Unwin in ITV1’s Coronation Street, a role she played between 2003 – 2006 and then again in 2015. She is currently playing Hilary Nicholson in BBC1’s Mrs Brown’s Boys. Her West End theatre credits include Madame Morrible in Wicked and her other theatre credits include the national tours of Handbagged and Grumpy Old Women.

Emily Head is probably best known as Carli in The Inbetweeners. A part she played in all three series and the first film. She most recently played Rebecca White in ITV1’s Emmerdale. Her theatre credits include Ange in Abigail’s Party and Helen in Coram Boy.

Tom Lister is best known for his role as Carl King in ITV1's Emmerdale, a role he played for nine years. Tom most recently starred as Julian Marsh in the critically acclaimed production of 42nd Street at London’s Theatre Royal Drury Lane. His other theatre credits include the national tour of Calamity Jane where he played Wild Bill Hickock.

Daniel Casey is probably best known for playing Sgt Troy in ITV’s Midsomer Murders and more recently Tom Bailey in BBC1’s EastEnders. His theatre credits include Laurence in the national tour of Abigail’s Party and Roger Shears in the National Theatre’s production of The Curious Incident of the Dog in the Night-Time.

Bernard has managed to keep his three fiancés blissfully unaware of each other – until now. Three Flight Attendants, three different airlines, three different timetables, each perfectly manoeuvred to avoid Bernard’s intricate love life crashing down to earth. But it’s 1965, and Boeing have launched a new, faster aeroplane that’s going to create some serious turbulence, with Bernard’s three fiancés landing unexpectedly and simultaneously! As the hilarity really starts to take off, can Bernard survive while his long-suffering maid struggles to keep up with the changes and his befuddled friend Robert can’t even remember which stories go with which airline….?

BOEING-BOEING by Marc Camoletti is translated by Beverley Cross and Francis Evans and is directed by Guy Unsworth.