Full Casting Announced for UK and Ireland Tour of THE BODYGUARD

by Best of Theatre Staff on Monday 5 November 2018, 5:12 pm in Cast Changes and Announcements 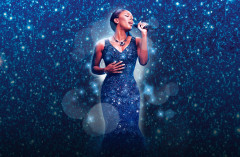 Producers, Michael Harrison and David Ian are delighted to announce full casting for the forthcoming UK and Ireland tour of the award-winning smash hit musical THE BODYGUARD opening at the Theatre Royal Glasgow on Monday 3 December.

Joining the previously announced Alexandra Burke as Rachel Marron will be Benoît Maréchal as Frank Farmer, Micha Richardson as Nicki Marron, Peter Landi as Bill Devaney, Craig Berry as Tony, Gary Turner as Sy Spector, Phil Atkinson as The Stalker and Simon Cotton as Ray Court. At certain performances the role of Rachel Marron will be played by Carole Stennett.

Alexandra Burke will not be performing the role of Rachel Marron at all shows. Patrons should check before booking.

Alexandra Burke returns to the role of Rachel Marron following her triumphant run in the show in both the West End and the subsequent sell out 2015/2016 tour. She first rose to fame after winning the fifth series of The X Factor and her debut number one single Hallelujah sold over one million copies in the UK, a first for a British female soloist. She most recently appeared as ‘Svetlana’ in “Chess” at the London Coliseum and can currently be seen as ‘Roxie’ in “Chicago” at the West End’s Phoenix Theatre. Last year she reached the final of “Strictly Come Dancing”. Her other theatre credits include ‘Deloris Van Cartier’ in the national tour of the musical “Sister Act”. Benoît Maréchal starred as Frank Farmer in the French Production of The Bodyguard. His other credits include Quartett at the Odeon Theatre Paris and La Passion Selon St Jean at the Chatelet Theatre. On TV he has appeared in the successful Spiral. Micha Richardson’s credits include the national tours of Legally Blonde, Fame and Mamma Mia! where she played the role of Ali. Her international tour credits include We Will Rock You and The Bodyguard. Peter Landi’s many theatre credits include This House at the National Theatre, To Kill a Mockingbird at Manchester’s Royal Exchange and I.D. at the Almeida. Craig Berry’s many theatre credits include Mamma Mia!, Cats, Closer to Heaven, Titanic and The Producers. Gary Turner is probably best known for playing Carlos Diaz in ITV1’s Emmerdale and Nathan Blake in Hollyoaks. His many theatre credits include national tours of Dead Guilty, How the Other Half Loves, Jekyll and Hyde and most recently Strictly Murder. Phil Atkinson recently played Pharaoh in Joseph and the Amazing Technicolor Dreamcoat at Kilworth House. He has also appeared in Little Shop of Horrors and Spring Awakening. Simon Cotton has appeared in A Clockwork Orange at the Park Theatre and The Dumb Waiter at the Yvonne Arnaud theatre. Carole Stennett’s many theatre credits include Rosa Parks in King at Hackney Empire, Dotty in Caroline, or Change at Hampstead Theatre and Nala in The Lion King in the West End and on tour. Carole has appeared as Rachel Marron many times in The Bodyguard in the West End, China and Toronto as well as the role of Nicki Marron in the show in the West End.

Based on Lawrence Kasdan’s 1992 Oscar nominated Warner Bros. movie starring Whitney Houston and Kevin Costner, THE BODYGUARD, directed by Thea Sharrock with book by Oscar winning (Birdman) Alex Dinelaris, had its world premiere at the Adelphi Theatre in London’s West End in 2012 and was nominated for four Olivier Awards. A sell out 18 month UK and Ireland tour followed, before the show returned to the West End at the Dominion Theatre. THE BODYGUARD has also played in the Netherlands, Germany, South Korea, Canada, Italy, Australia, Madrid, France, and on tour throughout the US and can currently be seen in Stuttgart.

Former Secret Service agent turned bodyguard, Frank Farmer, is hired to protect superstar Rachel Marron from an unknown stalker. Each expects to be in charge; what they don’t expect is to fall in love. A romantic thriller, THE BODYGUARD features a host of irresistible classics including Queen of the Night, So Emotional, One Moment in Time, Saving All My Love, Run to You, I Have Nothing, I Wanna Dance with Somebody and one of the biggest hit songs of all time – I Will Always Love You.