Full Cast Announced For Get Up, Stand Up! The Bob Marley Musical

by Best of Theatre Staff on Friday 9 July 2021, 5:09 pm in Cast Changes and Announcements 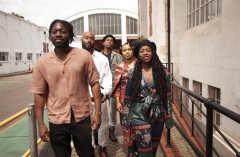 Producers have today announced the full cast for Get Up, Stand Up! The Bob Marley Musical, they join Arinzé Kene who has already been announced in the title role. With unlimited access to Marley’s magical, revolutionary songs and a book by award-winning Lee Hall, acclaimed director Clint Dyer channels the creative quest and spiritual power of a universally embraced icon. The production brings a dynamic company of performers that fuse with the finest reggae musicians to bring this exhilarating story of struggle, freedom and transformation from Trenchtown to the West End.

The explosive new production celebrates the immense life and timely message of Jamaican soul rebel Bob Marley - from a life of poverty to visionary international superstar. Crucial fellow soul rebels in the cast include the sensational Rita Marley and the I Three and his inspiring brothers in arms, Peter Tosh, Bunny Wailer and Lee ‘Scratch Perry’.The World Premiere musical begins performances at the Lyric Theatre on 1 October 2021 with an opening night on 20 October.

‘It’s not all that glitters is gold, half the story has never been told’

From the hills of rural Jamaica, armed only with his overwhelming talent and righteous beliefs, Bob Marley applied himself with resolute determination to achieve international acclaim for his prophetic musical message – a gospel of love and unity.

Lose yourself to the rhythm of 'Exodus', 'No Woman No Cry', 'Waiting in Vain', 'Three Little Birds', ‘I Shot the Sheriff’, 'Could You Be Loved', 'Redemption Song' and many more.

Arinzé Kene
Theatre credits include: One Night in Miami (Donmar Warehouse), Girl from the North Country (Old Vic), Death of a Salesman (Young Vic). TV credits include: Informer (BBC), Flack (UKTV), I Am... (Channel 4), Crazyhead (E4/Netflix Original) and The Long Song (BBC One). Arinzé Kene is a writer and performer whose Olivier award-nominated one man play Misty, ran at the Bush Theatre to widespread critical acclaim and transferred to the West End. Film credits include: Michaela Coel’s Been So Long (BBC/Netflix), The Pass (Toledo Productions), How to Build a Girl (Film 4) and I'm Your Woman (Amazon). Awards include: Black British Theatre Awards – Book and Lyrics recognition award (2020), Evening Standard Film Award – Best Supporting Actor (2016).​

Gabrielle Brooks
Theatre credits include: J'Ouvert (Harold Pinter Theatre); Anna Bella Eema (Arcola Theatre), A Midsummer Night’s Dream (Regent’s Park Open Air Theatre), Twelfth Night (Young Vic), The Way of the World (Donmar Warehouse), The Wizard of Oz (Sheffield Theatres), Everybody’s Talking About Jamie (Sheffield Crucible), Lazarus (King’s Cross Theatre), The Strangers Case (Liverpool Everyman Theatre), The Book of Mormon (Prince of Wales), I Can’t Sing (London Palladium) and Our House (The Savoy). TV credits include: Shadow and Bone and Coming Down The Mountain. Film credits include: Notes on A Scandal. Gabrielle has recently created and produced BlackStage UK – an emotional and educational exposé on what it means to be Black in the UK Arts industry, featuring 30 Black and Black mixed-raced workers from across the sector and from all over the UK.

Melissa Brown-Taylor
Theatre credits include: The Book of Mormon (Prince of Wales), Princess in Sleeping Beauty (Belgrade Theatre), This is Elvis (UK Tour), Aladdin (The Broadway Theatre), All or Nothing - The Mod Musical (UK Tour), Aladdin (Salisbury Playhouse), Roundelay (UK Tour) and A Voice In The Crowd, (Almeida Theatre).

Jacade Simpson
Theatre credits include: As You Like It (Regent’s Park Open Air Theatre), One Love (Birmingham Rep), The Book of Mormon (Prince of Wales), We Raise Our Hands in the Sanctuary (Albany Theatre), Kiss Me, Kate (Opera North) and The Scottsboro Boys (Garrick). Television credits include: Casualty (BBC), Humans (Channel 4), Doctors (BBC) and My Almost Famous Family (CBBC). Short film credits include: Sugababies, Civilised, White Liar and When the Earth Fell Down.

Savanna Jeffrey
Theatre Credits include: The Book of Mormon (Prince of Wales).

Rohan Pinnock-Hamilton
Theatre credits include: Dreamgirls (The Savoy), The Scottsboro Boys (Garrick), Some Like it Hip Hop (West End and Tour), Riverdance (European and US Tour), Joseph and His Amazing Technicolor Dreamcoat (UK Tour), Hairspray (West End) and Mary Poppins (UK Tour). TV credits include: Children’s Ward and My Parents Are Aliens. He also starred inITV’s celebrity dance show Dance-Dance-Dance, where he reached the final.

Nate Simpson
Theatre credits include: Mowtown (Shaftesbury Theatre), The Lion King (Lyceum) and The Crooners (UK Tour). He has worked extensively in the music industry, performing on television, radio, at Festivals and in arenas, both in his own right as an artist, and as a background vocalist.