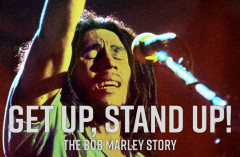 Producers today announced the world premiere of a brand-new musical which tells the remarkable story of iconic artist Bob Marley will open at the newly refurbished Lyric Theatre in London’s West End next year. The production will begin previews on Saturday 6 February 2021, what would have been Marley’s 76th birthday.

Taking inspiration from Marley’s visionary lyrics to tell his extraordinary personal story, and featuring an electrifying mix of his hits played live, GET UP, STAND UP! THE BOB MARLEY STORY is brought to the stage by the Olivier Award-winning team of writer Lee Hall and director Dominic Cooke.

The production will star Arinzé Kene as Bob Marley.

With unprecedented access to Marley’s catalogue, the musical will feature Marley’s greatest songs performed live by the cast including No Woman No Cry, Exodus, 3 Little Birds, Get Up Stand Up and many more.

Tickets for the production will go on sale on 21 april 2020.

Cedella Marley (Bob Marley’s daughter) said: “Our father’s music means so much to so many people around the world, we’re beyond thrilled to be able to bring it to both fans and new audiences alike in a new way led by the stellar team of Lee Hall and Dominic Cooke, and starring the fantastic Arinzé. As a family we feel that our father would be proud to know that his legacy is a source of creative inspiration and continues to bring people together.”

Following a hugely successful workshop in 2019, producers Playful Productions, Stage Play and Trim the Wind are delighted to announce that Get Up, Stand Up! The Bob Marley Story, the definitive new musical featuring Bob Marley’s iconic hits played live on stage, will begin previews in London at the newly refurbished Lyric Theatre on Saturday 6th February 2021. Brought to the stage by a multi award-winning team, Lee Hall’s (Billy Elliot The Musical, Network) book takes direct inspiration from Marley’s visionary lyrics to tell his extraordinary personal story as an artist, the production will be directed by Dominic Cooke (Follies, Clybourne Park) and star Arinzé Kene (Misty, Girl from the North Country).

Arinzé Kene said: “I feel absolutely honoured to be able to take on this role. It is not only an honour to be able to spread Bob Marley’s message further, but to get to be him for a little while is a lifelong dream come true. I grew up on his music and his mantra and he has been one of my role models since I was a child. I feel as if he's in my DNA. He’s the man, I love him.