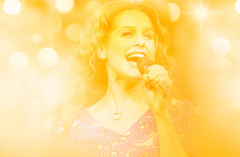 The Olivier, Tony and Grammy award-winning show opened in the West End in February 2015 when Carole King surprised the audience by joining the cast at the curtain call to sing You’ve Got A Friend. In February this year the show celebrated its first birthday at the Aldwych Theatre as well as the 45th anniversary of King’s Grammy- award winning album Tapestry. Last month the cast of Beautiful - The Carole King Musical joined Carole King on stage at her Hyde Park concert playing to over 65,000 people.

The current West End cast is led by Cassidy Janson in the title role alongside Alan Morrissey who plays King’s husband and song-writing partner Gerry Goffin with Lorna Want as song-writer Cynthia Weil, a role for which she won the 2015 Olivier for Best Actress in a Supporting Role in a Musical, Ian McIntosh as song-writer Barry Mann, Gary Trainor as music publisher and producer Don Kirshner and Diane Keen as Genie Klein, King’s mother.

Beautiful – The Carole King Musical is the untold story of her journey from school girl to superstar; from her relationship with husband and song-writing partner Gerry Goffin, their close friendship and playful rivalry with fellow song-writing duo Barry Mann and Cynthia Weil, to her remarkable rise to stardom. Along the way, she became one of the most successful solo acts in music history, and wrote the soundtrack to a generation.

Beautiful - The Carole King Musical is based on the early life and career of legendary singer/ songwriter Carole King and book by Douglas McGrath with words and music by Gerry Goffin, Carole King, Barry Mann and Cynthia Weil and is directed by Marc Bruni. Choreography is by Josh Prince with set designs by Derek McLane, costume designs by Alejo Vietti, lighting by Peter Kaczorowski and sound by Brian Ronan. Orchestrations and Music Arrangements are by Steve Sidwell.

With a cast of 26 and an orchestra of 12, Beautiful - The Carole King Musical features the Carole King classics including So Far Away, It Might As Well Rain Until September, Take Good Care of my Baby, Will You Love Me Tomorrow, Up on the Roof, Locomotion, One Fine Day, You’ve Got a Friend, (You Make Me Feel Like) A Natural Woman and I Feel the Earth Move, along with hits like You’ve Lost That Lovin’ Feeling, On Broadway and Uptown from songwriters Barry Mann and Cynthia Weil.

Beautiful - The Carole King Musical continues at the Stephen Sondheim Theatre on Broadway and a US tour of the show began in September 2015 in Rhode Island. An Australian production will open in Sydney in 2017.

The original Broadway cast recording of Beautiful - The Carole King Musical is available on Ghostlight Records via www.beautifulonbroadway.com/look-listen/music