by Best of Theatre Staff on Thursday 3 November 2016, 10:02 am in Cast Changes and Announcements 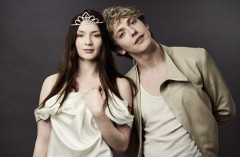 The world premiere of the long-awaited Jim Steinman’s Bat Out Of Hell – The Musical will take place in London’s West End at the London Coliseum, opening on Tuesday 20 June 2017, following previews from 5 June, for a limited season until 22 July 2017. This follows previews at Manchester Opera House from 17 February to 8 April 2017.

As with many great works of art, the genesis of the Bat Out Of Hell album occurred across a number of years. One of the songs was written while Steinman was an undergraduate at Amherst College in the late 1960s. In the 1970s,Steinman wrote a theatrical musical that was presented in workshop in Washington D.C. in 1974 and featured many of the songs that would ultimately appear on the Bat Out Of Hell album, which was released in 1977.

Jim Steinman’s previous musicals include his collaboration with Andrew Lloyd Webber on Whistle Down the Wind, including the hit single released by Boyzone, No Matter What, and the musical Tanz der Vampire, which has been running for 20 years and has been presented in Vienna, Stuttgart, Berlin, Hamburg, Paris, Budapest, Warsaw, St Petersburg and Tokyo.

Jim Steinman’s Bat Out Of Hell – The Musical is produced by David Sonenberg, Michael Cohl, Randy Lennox, Tony Smith, and produced in association with Bat Out of Hell Holding Limited.