by Best of Theatre Staff on Monday 4 April 2016, 11:54 am in Cast Changes and Announcements 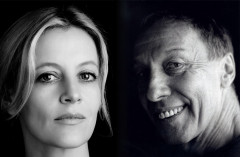 From 27 April, Martin Barrass will return to the role of Mr Perks and Suzy Cooper has joined the cast as Mother in the Olivier Award-winning production of Mike Kenny’s stage adaptation of E. Nesbit’s novel The Railway Children – Live on Stage. Also joining the cast are Shaun McCourt as Jim and Adam Collier, Alan Drake and Julie Gilby.

Sophie Ablett continues as Bobbie, Matt Jessup as Peter, Beth Lilly as Phyllis, Lindsay Allen as Mrs Perks, Peter Gardiner as Doctor/Butler, Connie Hyde as Mrs Viney, Blair Plant as Father/Schepansky, Moray Treadwell as the Old Gentleman and Helen Brampton in the ensemble. The children’s ensemble is made up of four teams of ten children aged between 8 and 16.

Martin first played Mr Perks in the 2009 production at York Theatre Royal where he revived the role last year to critical acclaim. He played the role at King’s Cross Theatre for three months from October last year. In 2012, he appeared in the National Theatre’s production of One Man Two Guvnors as Alfie at the Theatre Royal Haymarket in London. Martin has appeared in numerous television series, including Mike Conrad in Emmerdale and Ron Frost in Angels.

Suzy Cooper played Helen Sutherland in the National Theatre/Live Theatre tour of The Pitmen Painters and is a member of Howard Barker’s company The Wrestling School. She played Jackie in the made-for-television movies The Booze Cruise I, II and III with Neil Pearson, Mark Benton, Brian Murphy and Anne Reid. Suzy was also the voice of Robbie the Seal in the Warner Bros animation film The Little Polar Bear 2.

The Railway Children opened at King’s Cross Theatre to critical and public acclaim on 14 January 2015, following previews from 16 December 2014.

The production at King’s Cross Theatre is in support of the Railway Children Charity that aims to help homeless and runaway children throughout the world, with 50p per ticket donated to the charity. To date, £335,000 has been raised by the theatre production since its West End debut in 2010.