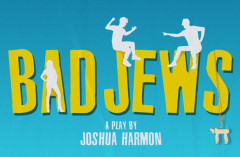 Daphna Feygenbaum is a “real Jew” with an Israeli boyfriend to prove it. When her cousin Liam brings home his non-Jewish girlfriend Melody, and declares ownership of their grandfather’s necklace, it sparks a viciously hilarious brawl over family, faith and legacy.

Having premiered in New York in 2012, Bad Jews transferred to the UK where it toured nationally before celebratingtwo sold-out engagements in London’s West End. The original production of Bad Jews was described the play as a “blisteringly funny” (Sunday Times) and “ferociously clever” (Evening Standard) comedy about family, legacy and what you choose to believe in.

Casting is still to be announced. Drama Desk and Outer Critics Circle Award-winning playwright Joshua Harmon’s other stage credits include Significant Other, Admissions, Skintight, and Ivanka: A Medea For Right Now.